Senator Manchin and the Kochs

Is this the connection that explains our senator’s behavior?

NEW: INSIDE the campaign by the Koch network to pressure @Sen_JoeManchin to oppose key pieces of his own party's agenda, including eliminating the filibuster and the For the People Act.
- Radio ads have been launched in West Virginiahttps://t.co/P5UfzkQAw0

That lobbying effort appears to be paying off. Manchin, in a recent op-ed, wrote that he opposed eliminating the filibuster and that he would not vote for the For the People Act, which, advocates say, would limit the influence of big donors on elections. . . .

CNBC reviewed an episode of a Koch policy group Americans for Prosperity’s video series, along with ads crafted by the organization. The network specifically calls on its grassroots supporters to push Manchin, a conservative Democrat, to be against some of his party’s legislative priorities.

Americans for Prosperity launched a website titled West Virginia Values, which calls on people to email Manchin “to be The Voice West Virginia Needs In D.C. — Reject Washington’s Partisan Agenda.” 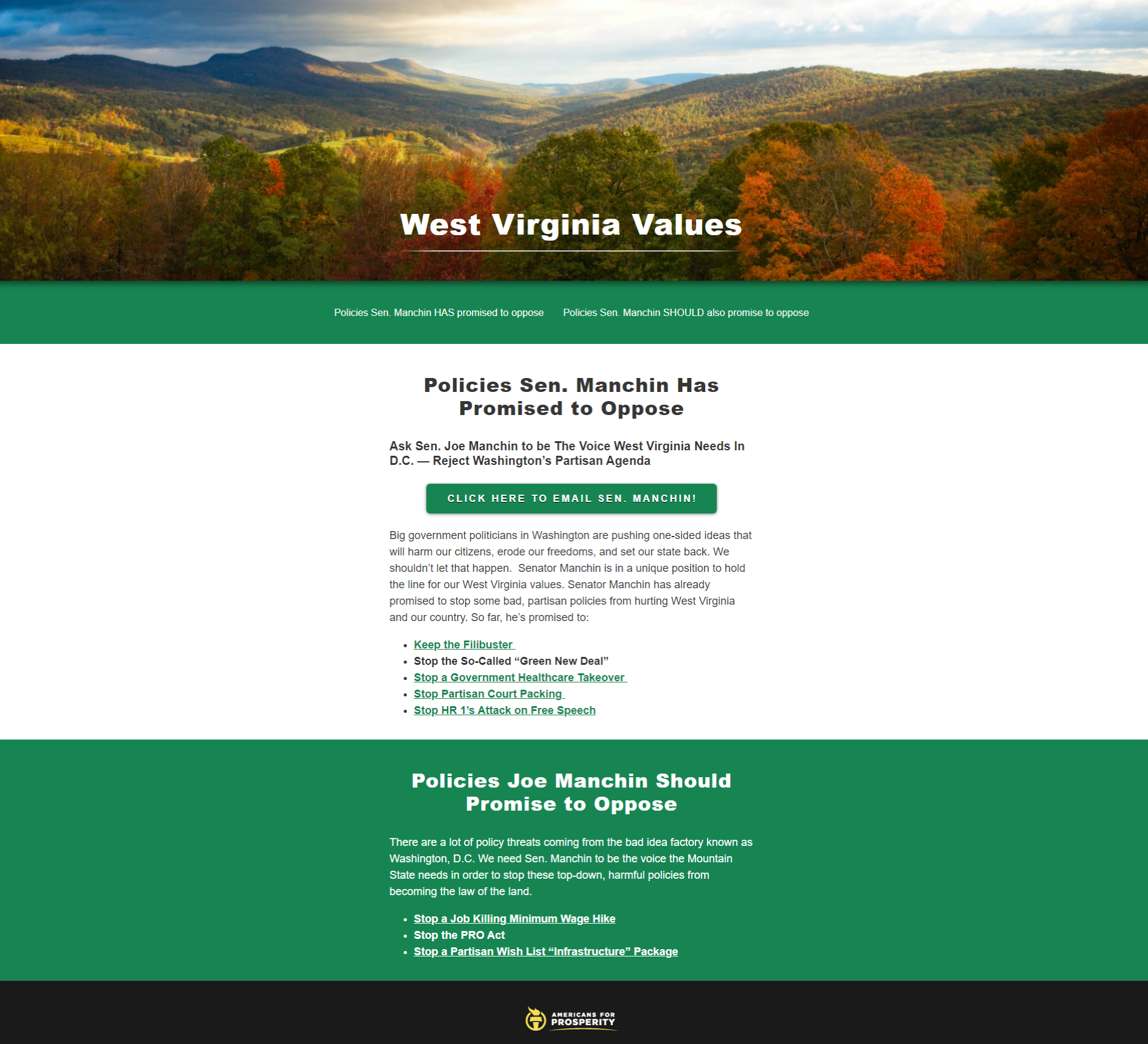 CNBC isn’t the only one that has noticed – The Daily Kos’s Joan McCarter covered some of the same ground earlier today:

The Koch network is doing him a real solid right now by running ads in West Virginia, and "specifically calls on its grassroots supporters to push Manchin, a conservative Democrat, to be against some of his party’s legislative priorities."

They've tailored their effort to Manchin, with an Americans for Prosperity (AFP) website they're calling "West Virginia Values," where they tell people to email Manchin and urge him to "to be The Voice West Virginia Needs In D.C.—Reject Washington's Partisan Agenda." It's almost like they're ghost-writing Manchin's statements about partisanship. They're sure going all out to make sure they're Manchin's best friends.

By the way, Senator Joe apparently did not make many friends with his Sunday Charleston Gazette-Mail op-ed (see the previous post) and how he handled it. Yesterday, The Hill reported:

A host of Democratic leaders and progressive activists who spoke to The Hill on Monday expressed a mix of resignation and anger over Manchin’s weekend op-ed voicing his objection to the For The People Act. Several noted there appeared to be no heads up to the White House or key Democratic leaders that it was coming. And it was widely seen as an abrasive move.
While a number of Democrats were careful with their public remarks, anger is building given the difficulties to passing major structural reforms now coming from within the party.

So how’s that bipartisanship coming along, Senator?

NEW: It's not just the For The People Act.

Murkowski is the lone GOP backer. "I don't know. It's a challenging one," she tells me about the path to 60.https://t.co/72BsngIXIZ

(Note – the Daily Kos article suggests that Murkowski did not like the way Manchin put her on the spot.)