The CEO of Murray Energy, Bob Murray, added yet another Wheeling area service club to his local speaking tour and once again a reporter for Ogden newspapers was there to cover it. From the description in the Intelligencer, yesterday's speech to the St. Clairsville Rotary was apparently very similar to the ones that he delivered to the Wheeling Rotary in January and the Wheeling Kiwanis in December. Like its predecessors, it featured attacks on Obama, stories about Murray's humble beginnings, attacks on the EPA, scary stories about the future cost of electricity, and, of course, more attacks on Obama. (Wisely, the Ogden newspapers sent a different reporter -- probably to insure that the story would not be exactly the same as one of the previous stories.)

Attendees also got to hear the same evidence for his assertions that previous audiences had heard. Once again Murray asserted that "every coal mining job creates 11 more jobs in a community." When I wrote about his speeches in December and January, I could not find any study that claimed 11 jobs for every mining job. What I did find was that the U.S. Bureau of Economic Analysis found that 4.4 indirect jobs were created, the University of Massachusetts Political Economy and Research Institute had a similar number (see chart below), and even Arch Coal only claimed seven indirect jobs. This time Murray claimed the research was done by Penn State University. Okay, I believe that I found their most recent study here but I could find nothing about 11 indirect jobs. (If it's there, it's well-hidden.) For Murray this didn't matter -- who was going to challenge him? It certainly wouldn't be a reporter from the local "newspaper." 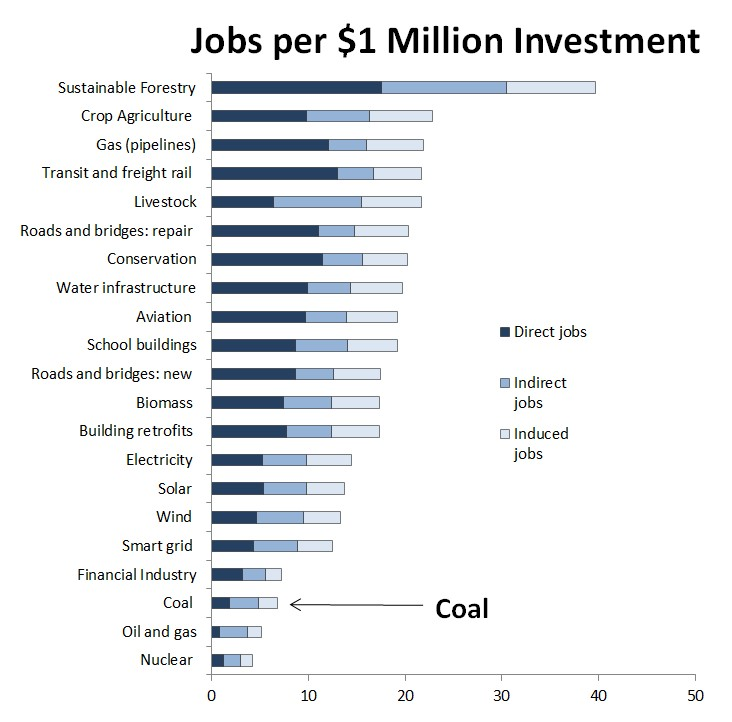 There is a rumor making the rounds that in order to celebrate the tour and provide funds for Murray Coal's next coal mine purchase, t-shirts and a CD will be sold at the next stop on the tour. The t-shirts will have a picture of a lump of coal surrounded by the names of all the service groups on the tour. The CD will feature an eclectic mix:

--- It's Delightful, It's Delovely, It's Bituminous (Coal Porter)
--- Mine Every Mountain
--- Thank the Almighty -- I've Got My Love To Keep Me Warm Because My Electric Bills Will Be So High Because of Obama's War on Coal That Is If He Doesn't Bankrupt the Country First (classic remix)

And of course, some "classic rock" covers: