More on the Republican racism on display at the Capitol rotunda

Yesterday, the group that the racist poster group claimed to be affiliated with put out a statement that essentially said: “Hey, we aren’t that racist!” And why did it take so long for WV Republican officials to notice?

The controversial booth with the racist poster at Friday’s “Republicans Take the Rotunda” event claimed affiliation with Act for America. The Southern Poverty Law Center considers ACT for America to be an anti-Muslim hate group because

If you examine the poster, the SPLC description would seem to be a perfect fit. However, even that group is distancing itself from the anti-immigration group at the rotunda. Yesterday, ACT for America released a statement disavowing themselves from the Charleston group:

While we find many of the views and actions of Congresswoman Ilhan Omar to be reprehensible, the display in the Capitol rotunda would have never been approved or endorsed by our National Office.

(Of course, this could just be the national group covering their behind.)

How could Republicans and their leadership not notice?

It wasn’t like the poster was hidden in the back corner where no one would see it. 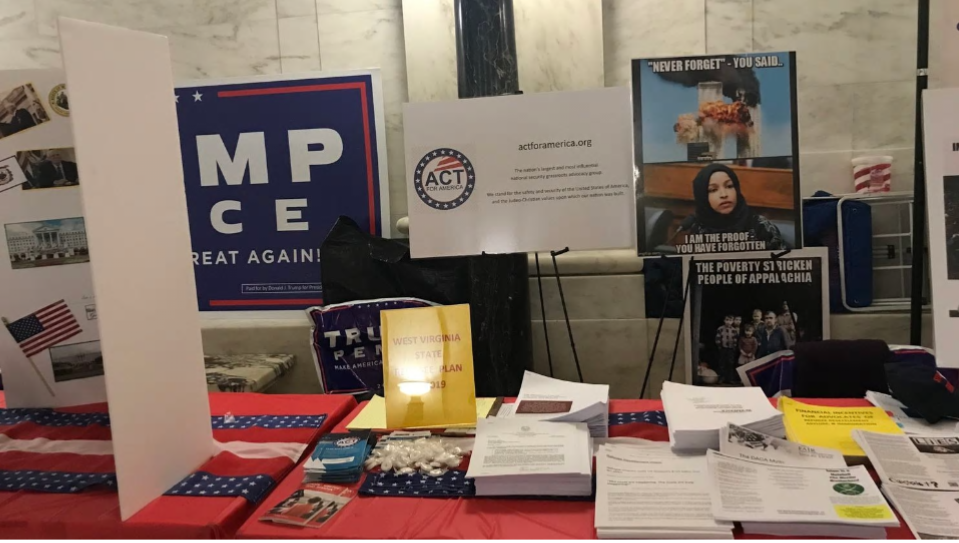 Reading a number of press reports, I’m left with the feeling that Republicans knew what was on display but didn’t react until the Democrats and others reacted and then they were “shocked, shocked, that racism was on display at the Capitol rotunda.” In the picture, note that the only item larger than the poster is a Trump Pence sign. And yet, no Republican noticed the racist poster?

And what took the chairwoman of the Republican Party, Melody Potter, so long to respond? I would think that she was the person most responsible for “Republicans Take the Rotunda” and yet she waited until Saturday to respond. Additionally, she still has not responded to this tweet from Charleston Gazette-Mail reporter, Jake Zuckerman:

Update: here’s Potter posing with the woman who ran that booth. Maybe her silence isn’t that surprising pic.twitter.com/03tAsfYjdb

Local House of Delegate’s Democrat Shawn Fluharty summed all this up nicely on Friday:

Governor, Party Chair, and state GOP leadership all were there today while blatant racism was displayed inside our Capitol and you mean to tell me not a single one could simply say - hey put that crap away it doesn't belong here - ??? Seems pretty simple to me. #wvpol