The supportive article describes Jenkins' sponsored drug legislation but tells us nothing about where those bills currently stand or their chances for success. Because any congressman can simply propose legislation, I decided to check on each bill to see what it's current status was.

The first establishes a fentanyl task force to coordinate the efforts of federal agencies in their efforts to eliminate fentanyl from communities.

This is House Bill 4090 and this is how Congress.gov reports its status. 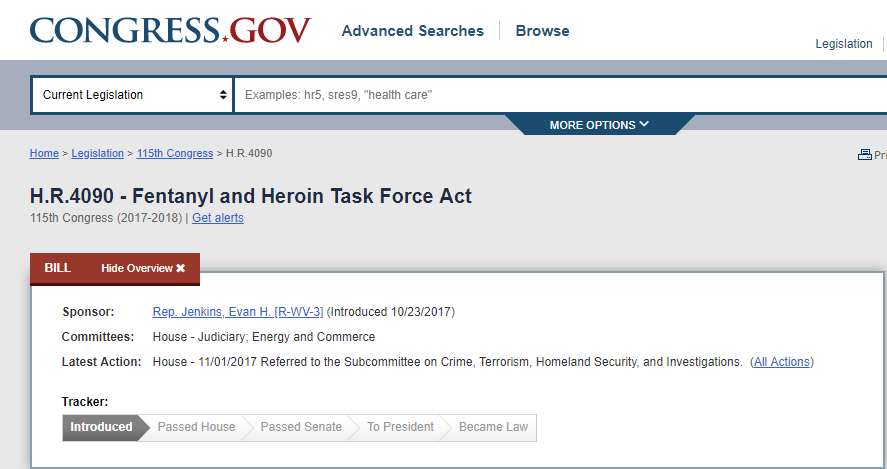 The bill was introduced almost five months ago and has gone nowhere.

Newborn babies born with drug addiction are a tragic casualty of opioid abuse. Jenkins was instrumental in founding Lily’s Place in Huntington, W.Va., which has now treated more than 200 babies for neo-natal abstinence syndrome.

His second measure before the House committee would take the type of care Lily’s Place provides nationwide.

“We have a bill before the Energy and Commerce Committee to take the model and allow it to be replicated around the county,” he said. “Here’s a West Virginia solution to a really tough issue.

While it may be an admirable bill, its been dormant since it was first introduced 10 months ago and the Congressional Budget Office has not bothered to look at its costs:

Jenkins said he also wants to tackle the drug epidemic head-on by holding drug wholesalers accountable for dumping millions and millions of pills into the community.

A third piece of legislation seeks appropriations for the Justice Department to increase the number of officers to halt the proliferation of both legal and illegal drugs into communities.

I spent a considerable amount of time trying to identify this vaguely-stated legislation. I couldn't and that might be why it's stated that way. (Who doesn't want our representatives "to tackle the drug epidemic head-on?")

It's easy for a legislator to propose legislation and maybe just as easy to report on that legislation's introduction. But isn't it also the reporter's responsibility to tell us how successful that legislator has been in getting the legislation passed? If this were an actual newspaper, I'd write this off as lazy reporting. However, it's not a real newspaper; it's part of a chain dedicated to electing/supporting Republicans and so what looks to be a rewritten public relations release from the Jenkins campaign gets placed on the front page as real news. (And of course, a decent-sized picture of Jenkins accompanies the article.)