How did WV’s elected officials respond to the decision in the Chauvin case?

There was nothing in today’s Ogden papers about their reaction and so I did some research. I could not find any response to the Chauvin verdict by our Republican House members: Mooney, Miller, and McKinley. Likewise, our Republican senator, Shelley Moore Capito, has also been silent as has our governor, Jim Justice. (Obviously, none of them wanted to upset the state’s Trump voters or disagree with Fox’s Tucker Carlson.) This morning, Democratic Senator Joe Manchin was on WV Metro News with Hoppy Kercheval. Before discussing infrastructure, Hoppy Kercheval asked Manchin about his reaction to the Chauvin verdict. Manchin said that he was “pleased to see the verdict” and that “the rule of law delivered accountability.” Watch:

The judicial process typically works pretty well but it’s also prone to error — as are humans.

Trust the process. Most jurors are trying to do the right thing— just don’t try to intimidate them and let them decide on their own.

Maybe my biases are showing but is West Virginia's AG suggesting that he disagreed with the verdict? (Note – he doesn’t say that justice was served in this case.) And in his last sentence, Morrisey appears to take a shot at Representative Maxine Waters. Yeah, predictable stuff from Morrisey who appears anxious to pander to his base.

What did the opinion-leaders over at Fox say about the decision?

Tucker Carlson suggests that the Chauvin guilty verdict shows we've "already given up on civilization."

Candace Owens takes that ball and runs with it, saying this was "mob justice" and "this was not a fair trial -- no person can say this was a fair trial." pic.twitter.com/FrOFT1YvLx

And here’s Tucker rudely ending a discussion with a corrections officer once he realizes that the officer doesn’t share his point of view:

What about Sean Hannity and Jeanine Pirro? I was somewhat surprised that both agreed with the decision. They did, however, find ways to criticize Black Lives Matter and Democrats.

In researching Fox's coverage, I found an interesting explanation for Hannity’s and Pirro’s position:
“Why Conservative Media Is Celebrating the Chauvin Verdict” by Christina Cauterucci at Slate. As Cauterucci explains the “one bad apple” theory:

When even a Fox News personality celebrates Chauvin’s conviction, isn’t that a sign that the movement against police abuse and for Black civil rights is making headway? But Pirro’s response to the Chauvin verdict instead suggests that the political right will have no trouble assimilating this particular murder into its existing worldview of dangerous thugs, heroic cops, and a culture of law enforcement that needs no dramatic overhaul. You’ve heard of “one bad apple”? Well, Chauvin’s that apple.

According to Cauterucci, police defenders “couldn’t ask for a better man to make an example of than Derek Chauvin” even as police kill around a thousand individuals each year. If you’re interested in the political dimensions of this topic, Cauterucci is worth a read.

Cauterucci called it. Today's political cartoon in the Wheeling News-Register: 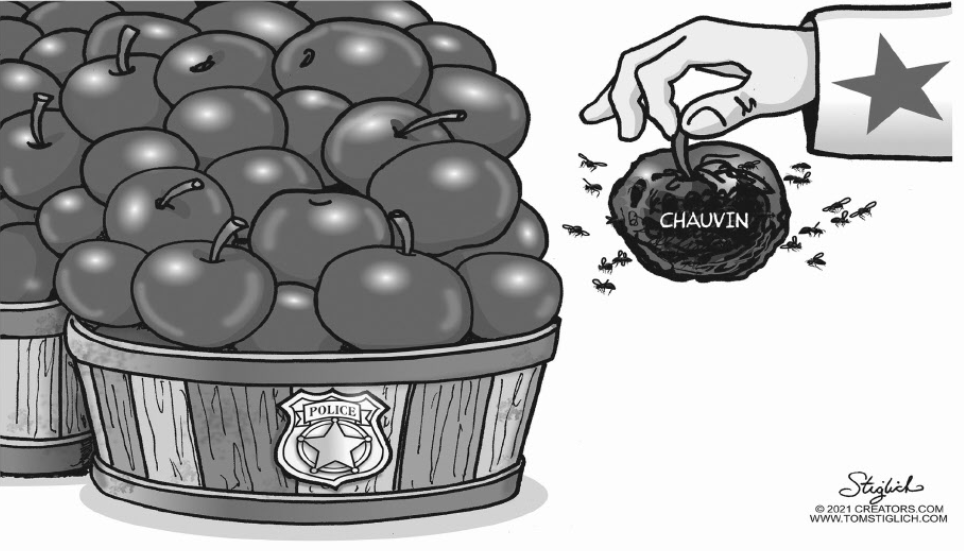