Hey, fellas, even the Wheeling Intelligencer has cut back on its anti-Hillary attacks

West Virginia Republican candidate for U.S. Senate Patrick Morrisey on Wednesday told Fox News that he was the best choice because he held the right positions “on all the issues that matter” like Hillary Clinton and Barack Obama.

Huh? Hillary is an issue that matters? He elaborated:

“They are looking for someone who will be strong to take on Joe Manchin,” Morrisey agreed. “On all of the issues that matter, I really match up very well against him. Whether it’s on Hillary [Clinton], Barack Obama or cap and trade, which killed coal jobs or Joe Manchin flipped flopped on Planned Parenthood, he’s bad on guns.”

Hillary? Even the Wheeling “newspapers” no longer blame her for everything that has gone wrong on the planet.

Although she did not win, and it’s been a few years since she held any office, our Republican senatorial candidates clearly believe that she can be used against their opponents. Here's the best (worst?) example:

This ad from GOP Senate candidate Evan Jenkins, photoshopping a picture like this to make it look like a primary opponent shook hands with Clinton instead of Trump is extraordinary dishonest.https://t.co/APF0f5YV9f pic.twitter.com/YbHI17442j

This, of course, required a creative explanation from Jenkins spokesperson, Andrew Sere:

“[J]ust as Morrisey’s campaign and his super PAC do in each of their ads portraying Evan with Hillary, Obama, Pelosi, etc., we sometimes take creative license while arranging images in order to help make a substantive point,” he admitted.

“Creative license?” How about “fabrication”?

But West Virginia is not alone in seeing these Hillary ads. From yesterday’s USA Today: 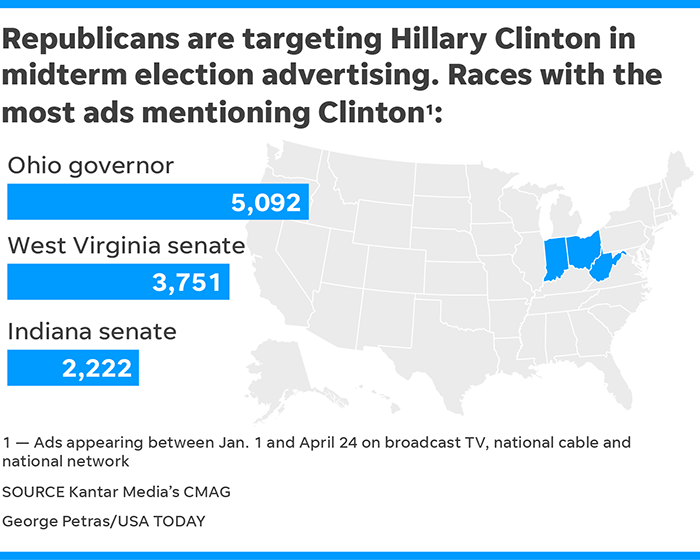 (On a per-capita basis, I think West Virginia wins easily.)

While it's easy to complain about how pathetic these candidates are, they aren't spending millions on ads that don't work. Okay, Clinton was quoted (without proper context) that she wanted to close down coal mines in the state. But she was very unpopular before she said that. Beyond the likely possibility that these Republican candidates have nothing positive to say, why are they still focusing on Hillary?