Ogden Newspapers adds another politician to its stable of favorites

More love for the descendants of Arch Moore*

A year ago, the Sunday Wheeling News-Register published a front-page article about Riley Moore, Senator Capito’s nephew and grandson of former West Virginia governor, Arch Moore. As I wrote then:

Ogden political reporter, Steven Allen Adams, and the News-Register have outdone themselves with one of the longest front-page stories this year and it’s about a non-local candidate who lost by over 800 votes earlier this month.

Last year’s article noted that Moore was looking to run for West Virginia state treasurer in 2020. To that end, yesterday’s Wheeling Intelligencer published an op-ed by Moore:

At the end of yesterday’s article is a note that informs us that Moore is a Republican candidate for State Treasurer in 2020.

Like last year’s News-Register article by Adams, yesterday’s op-ed by Moore tells us that he began career as a welder:

My first job was as a welder. After I completed trade school and became certified, I worked at a mining operation and was responsible for maintaining all on-site equipment.

It was hard work, but it was rewarding, and it led me to want to open my own mobile welding business.

Yes, Moore asserts his working-class roots. But missing in his work history, as it was last year in Adam’s piece, is what I consider to be important information that West Virginia’s voters ought to be aware of in assessing Moore’s candidacy: that Riley Moore worked as a lobbyist for the Paul Manafort-connected Podesta Group in the Ukraine. Here’s a screen shot of Open Secrets' listing of the lobbyists for the European Centre for a Modern Ukraine: 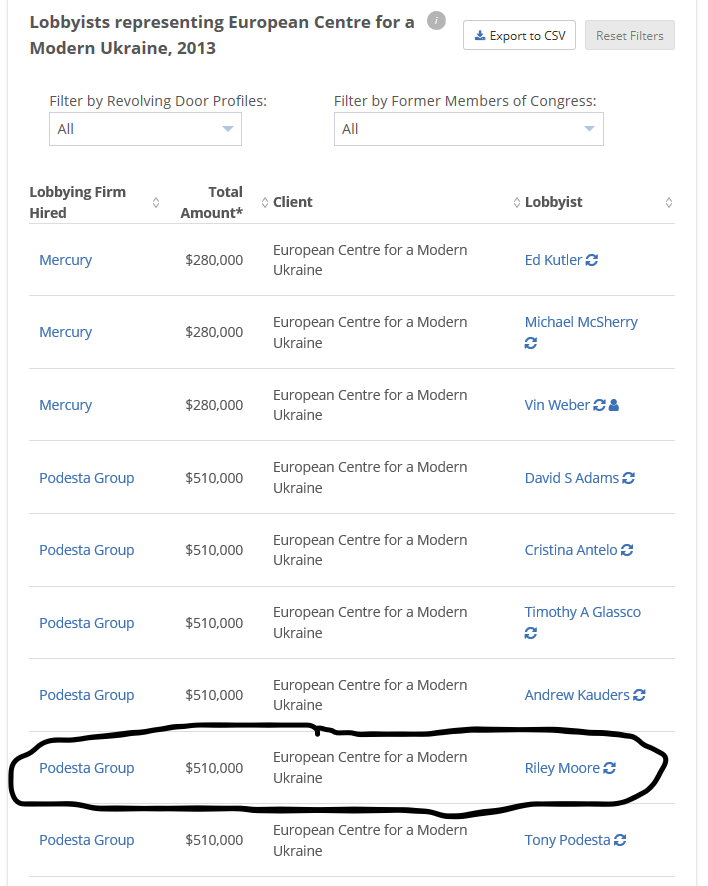 (Note -- as Politico recently reported, the Podesta Group knew that the Centre was a front-group for the previous Ukrainian government.)

Last November’s post about Riley Moore also noted his connections to “dark money” in the 2018 election. I wrote:

The other interesting article was by Dave Mistich at West Virginia Public Broadcasting earlier this week. Mistich, who doesn’t get enough recognition for his fine investigative work, looked at some of the darker money that was supporting ads on both sides during our last election. One of these groups was the Republican-backed 1863 PAC:

Less than two weeks before the election the Charleston Gazette Mail reported that the Secretary of State’s office issued a cease and desist order to 1863 PAC, citing no registration as a state or federal political action committee.

Many questions about the group’s origins and efforts have centered around Riley Moore, a Republican delegate from the 67th House District who was ultimately defeated in the 2018 midterms by Democrat John Doyle.

Moore has weaved back and forth on explaining his involvement, affiliation or knowledge of anyone at 1863 PAC. First, he told WV MetroNews he had personal relationships with those involved with the group. Later, the Gazette-Mail reported Moore denied affiliation with 1863 PAC and declined further comment.

Back to Ogden Newspapers

Ogden’s campaign to get Moore elected began last year with a long feature article about him and now they’ve printed his op-ed. Will his opponents get to run op-eds? Not unlike the opponents of our local congressman, will they get any coverage beyond the announcement that they are running? Don’t bet on either.

Yes, this is from Ogden Newspapers which periodically remind us how “fair and balanced” they are and how they play no favorites. For example:

We do not slant our reports to favor anyone. We let the chips fall where they may.

Our responsibility is to our communities and states, to what is good for them. We are obliged to no individual, organization, political party or ideology.

For those who believe Ogden, I have this bridge down in Benwood that I can let you have – real cheap.

A final thought on the likely impeachment trial in the Senate

During the impeachment inquiry in the House, Trump and some Republicans argued that the president’s actions were justified by Ukrainian corruption. Joe Biden’s son, Hunter, and his connection to a Ukrainian energy company has been, and likely will be, an important Republican talking point. As the New Republic paraphrases Republicans:

What was he doing at Burisma? What qualified him to serve on its board? Did his involvement raise concerns?

It seems to me that these are interesting questions but irrelevant to the issue of whether the President of the United States was attempting to bribe a foreign country for his own personal gain. Additionally, given her nephew’s rise from welder to Ukrainian lobbyist, I’ll also be interested to see if Senator Capito is among those who question Hunter Biden’s qualifications and how he got the Burisma job. Sadly, finding a good job for those who are well-connected politically isn’t just confined to one political party – it’s clearly built into the system.

*Perhaps it’s not having been born and raised in West Virginia, but I have never understood the state’s reverence for Arch Moore. I'm aware that he was a charmer with all kinds of charisma, but the man plead guilty to five felony counts including extortion. Yes, I know -- if he were still alive and allowed to run, he’d probably win again in 2020 at the age of 97.