Some thoughts on the future of newspapers

Is Ogden’s “newspapers on the cheap” the only way to go?

No news on yesterday’s front pages

The front page of yesterday’s Wheeling Intelligencer and Wheeling News-Register consisted of two word-for-word PR releases and two old articles from another Ogden paper. On page 1 were the following:

Other than updating date references, this story comes word-for-word from a West Liberty University PR release from last Thursday.

This is word-for-word from a WVU Medicine PR release published last Thursday.

This is the exact same story that was published in the Weirton Daily Times last Friday.

This is also from Friday’s Weirton Daily Times.

(Note -- the front page of the afternoon News-Register featured the same four stories.)

The nationwide decline of newspapers

As the following chart from Editor and Publisher suggests, American newspapers have been in decline for thirty years. 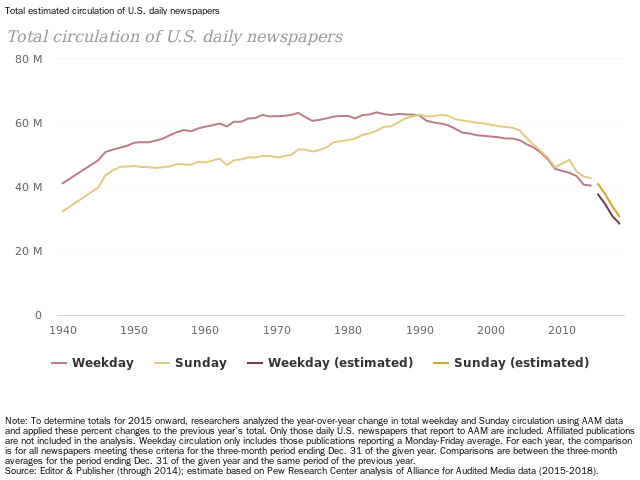 In an article about this decline, the Associated Press noted some of the causes for this decline earlier this year:

Blame revenue siphoned by online competition, cost-cutting ownership, a death spiral in quality, sheer disinterest among readers or reasons peculiar to given locales for that development.

How then has Ogden Newspapers survived and even increased its number of newspapers in such an environment? Another look at newspapers on the cheap

I have written about this previously. (See here and here, for example.) Ogden survives by cutting staff and, as the above examples demonstrate, employing economies of scale like using stories and editorials from other Ogden papers even if they have little or no relevance to their audience. Since it appears that a skeleton staff works weekends, this especially applies to the Sunday and Monday editions. And despite the industry’s decline, Ogden continues to buy newspapers; last Friday, Ogden announced that they had purchased two more newspapers in central Ohio.

Is this the only way a newspaper can survive? A look at another newspaper’s business model

Poynter documents how the Gazette-Mail significantly increased their online subscriptions sooner than planned and how the paper has adapted to a changing news environment:

The Gazette-Mail now has weekly digital strategy meetings that include people from circulation, marketing and editorial. One example – they’ve looked at analytics on stories that drive subscriptions. Those stories are the same watchdog work the Gazette-Mail is known for.
That gives journalists an incentive to say no to stories that don’t live up to those standards, said environmental reporter Kate Mishkin.

They do "watchdog work"? The comparison with our local papers is stark: for example, contrast Mishkin’s statement with Ogden’s stenographic coverage of the Bishop Bransfield scandal, the reasons for the loss of OVMC, or the lawsuit and government investigation of Wheeling Hospital.

I really believe that newspapers still have value; I just wish we had a real one in Wheeling. I think people would support it.

*I would also note another monetary source for the owner: our local papers cover Ogden-sponsored events as if they were news; they also editorialize for actions that would benefit the owner’s baseball team without mentioning the common ownership. Yes, it’s a conflict of interest but for Ogden papers, it doesn't matter.