Yesterday’s Sunday Wheeling News-Register featured local congressman Bill Johnson’s rebuttal to last month’s critical fracking study by the Ohio River Valley Institute. In the op-ed, Johnson does two things: he refutes arguments never raised by the study and he questions whether we should trust the study as a source.

Straw men (Johnson refutes arguments that the study never made)

Johnson first tells us that oil and gas industry has made large investments in the area, paid for mineral rights/royalties, and paid workers well. But the study was not about any of these. Here is the subheading to the report which, I think, is what the study is about:

Since the start of the fracking boom, Ohio, Pennsylvania, and West Virginia’s biggest gas-producing counties have seen declines in their share of jobs, income, and population.

This graphic, from the institute, adds some detail:

-saw jobs grow by only 4%, less than half the national average

-saw personal income grow by only 10.5%, less than half the national averagehttps://t.co/goFHwoXT8W pic.twitter.com/IKzmMTdchF

Johnson says nothing about the study’s thesis – obviously, it is a lot easier to attack arguments the study didn’t make.

Instead of questioning the article’s statistics or how that evidence does or does not prove the Institute’s thesis, Johnson wants to deal with sources. He first tells us about the quality of his sources:

Those are just a couple of examples from highly regarded sources, but there are dozens of reports from the American Petroleum Institute, Ohio Oil and Gas Association, Shale Crescent USA and others that tell the same story.

Then, Johnson attacks the study:

Contrast these highly regarded sources with this new report which comes from the Ohio River Valley Institute, a relatively new organization run by the former director of the Sierra Club’s Pennsylvania chapter. Its advisory board is filled with environmental activists, and the organization has a clear agenda to promote renewable energy sources.

Sorry, Representative Johnson, you support none of your attacks and your references include clearly biased sources (the American Petroleum Institute?) and no “independent third parties.” Most importantly, please note that the Sierra Club did not write the Institute's report and the study uses verifiable statistics such as Ohio County’s population loss of 6.9% from 2008 and 2019. (I checked and according to the U.S. Census, the county’s 6.9% loss is correctly stated. I obviously did not check all the study’s statistics but unlike Johnson’s vague references, the institute’s evidence can readily be checked.)

Finally, while Johnson raises the question of the bias and credibility of the Ohio River Valley Institute, he doesn’t explain why we should trust a congressman who has received $670,260 during his congressional tenure from his biggest donor, the oil and gas industry. Here's Bill Johnson's contributor summary from Open Secrets: 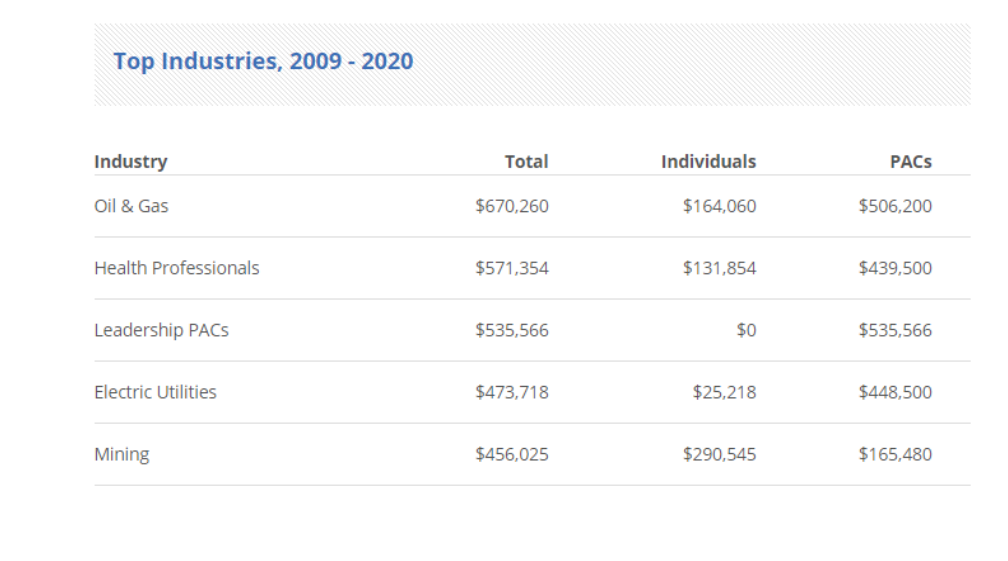