No "light of information" on Trump or Hurricane Matthew

The Intelligencer once again fails its readership

On August 24, the Wheeling Intelligencer used the anniversary of its founding to once again tell its readers why the Intelligencer is so important to the Ohio Valley:

Now more than ever, The Intelligencer strives to be the reliable, accurate provider of information for our readers. The so-called “Information Age” often resembles one of those many-faceted, revolving balls once popular at entertainment venues. There is light, lots of it, radiating in all directions. It is enough to make a viewer dizzy.

Our mission is to focus the light of information on what is important and interesting to our readers. No other medium does it as well. No other medium brings the level of resources we employ to keep readers informed.

There are two major stories that Americans have been following the last two days. If you watched any television news reports last evening or today of if you've seen any other newspaper, you could not miss them: the devastation caused by Hurricane Matthew and the release of a damaging video in which Donald Trump made lewd remarks about women. Here, for example, are three front pages from three nationally-known newspapers: 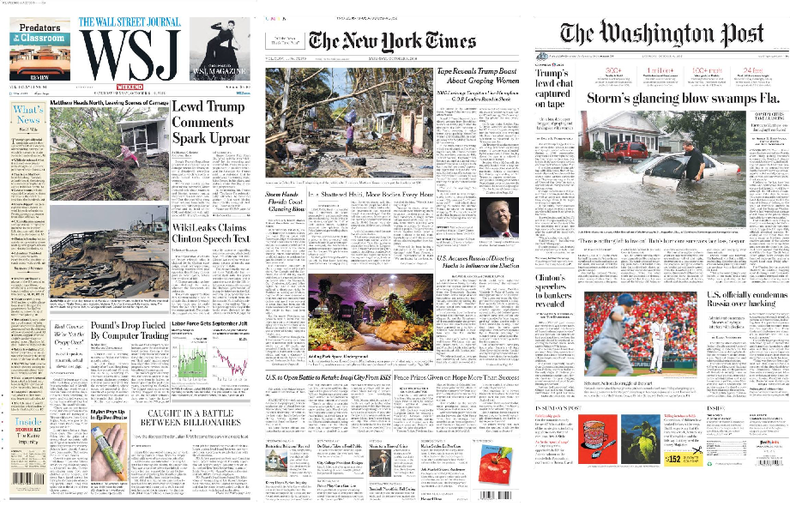 How did the Saturday Wheeling Intelligencer handle these important stories? It didn't -- there is no mention of either anywhere in this morning's paper. (It may be the only paper in the country that ignored both stories.) That's because the Intelligencer is not about focusing "the light of information" or in any way keeping its readers informed. Simply put, its purpose is to propagandize for the Republican Party and the business interests that support it.