An April 14, 2021 update of the Ogden’s newspaper business plan and some thoughts on its future

As my headlines suggest, its time to take another look at the Ogden Newspapers business plan. I’ve written about this topic on a number of occasions. (See “newspapers on the cheap” in the archive located on the blog's front page.)

Today‘s version of the “incredible shrinking newspaper” is down to 16 pages and features all of the above. Here are scans of pages 1 and 7 of today’s Wheeling Intelligencer: 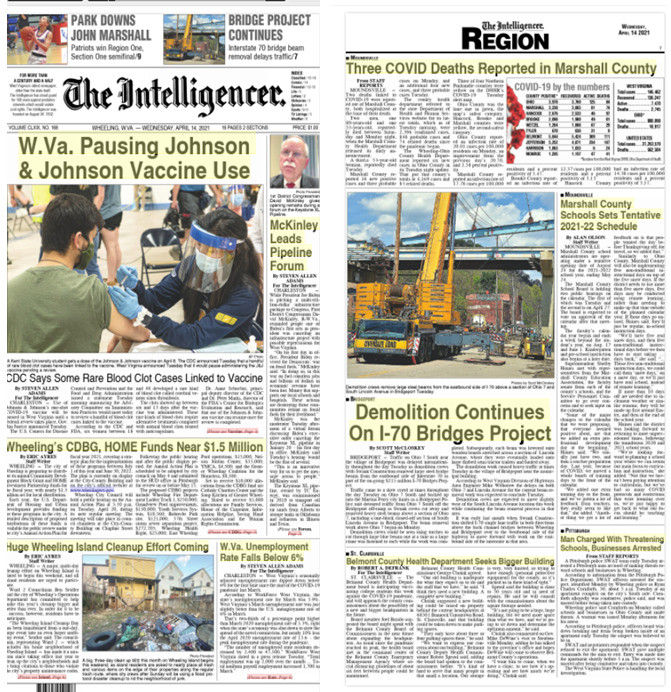 Notice the headline size of the vaccine article on the front page and the bridge demolition article on page 7. Does either justify a font size that much larger than those that surround it? (The headlines for deaths of presidents aren't much bigger than the bridge demolition headline.) Then look at the size of the accompany photos. Does a large picture of someone being inoculated or an I-70 bridge add anything to the reader’s understanding? I doubt it. Both take up lots of space, however.

(I started counting bridge pictures when the I-70 project began but gave it up after the first week – they were too frequent and repetitious to bother counting. It should also be noted that despite the West Virginia headline over the vaccination photo, the accompanying photo is from Ohio rather than WV.)

Additionally: back in October 2019, our local Ogden papers announced that they had moved to “a new, easier-to-read type face.” As any college student struggling to finish a writing assignment will tell you: a larger font requires fewer words but takes up much more space.

There is only one national news story in the front section. On page 8, you’ll find

Expert Says Cop Was Justified in Pinning Down George Floyd

The AP story would appear to cover what happened yesterday in the controversial Floyd trial in Minneapolis. If you read the original AP report, which comes in at 1256 words, you’ll see that the lengthy story focuses on the testimony of an important defense witness, former police officer Barry Brodd. Unfortunately for local readers, the Intelligencer includes only the first 25% of the AP story in which Brodd makes the case for the defense. Missing from Intelligencer’s version is the prosecution’s cross-examination of Brodd. What the Intelligencer printed is terribly one-sided: the original story details both sides including this:

Prosecutor Steve Schleicher used his cross-examination to once again painstakingly go through video clips of a pinned-down Floyd gasping that he couldn’t breathe and then going limp.

The prosecutor hammered away at Brodd, saying that a reasonable officer in Chauvin’s position would have known Floyd stopped resisting, that another officer told him he couldn’t find a pulse, and that others said Floyd had passed out and was no longer breathing.

(It’s tempting to blame this on Ogden’s conservative bias. That may be but it also may be that the page had only have so much space and advertising beats informing every time.)

As a person who follows what is happening in journalism, I am well-aware of the tough times facing American newspapers. Rising costs, shrinking circulations, and advertisers finding cheaper mediums have brought the demise of many newspapers which once played a vital role in their communities. My criticisms are not generic to the medium; rather, it is of the Ogden business plan that includes producing a half-assed news product while propagandizing for the Republican Party.

What would I do instead? That’s a fair question for a persistent critic. Most importantly, I would try to make the newspaper, to coin a phrase, “fair and balanced.” Not in the Fox sense of the word but rather in the cover-all-sides-of-a-story sense. I know a number of people who simply don’t read the local papers because of their obvious biases. (And they are not all liberal Democrats.) Ogden might get these people back if they thought that they would be getting news rather than Republican/Ogden propaganda.

Here’s a recent example: In Ogden’s local papers, the Democratic candidate for U.S. Senate, Paula Swearingen, was mention in just one sentence from her primary election win in June to the November election. Her Republican opponent, Shelley Moore Capito, was featured in dozens of articles including two lengthy ones by Ogden’s political reporter. This happens in almost every election; except for the governor’s race this past year, Ogden routinely ignores Democrats (sometimes totally). If a citizen wanted to become more knowledgeable before an election, why would they bother reading an Ogden newspaper?

On an issue: The Green New Deal has considerable support among the general population roughly equivalent (depending upon the poll) to those who reject it. Despite the polls and interest, I have not seen anything but negative articles, columns, and editorials in our local Ogden papers. Like coverage of the candidates, I believe that readers want to be informed not propagandized and not just on that issue. I believe too many people, like myself, are turned off by Ogden’s practice of putting their right-wing Republican bias into what and how candidates and issues are covered.

I have a hunch that I am not alone when I write that I wish I could look forward to reading a good daily newspaper. It's too bad we don't have one in Wheeling.