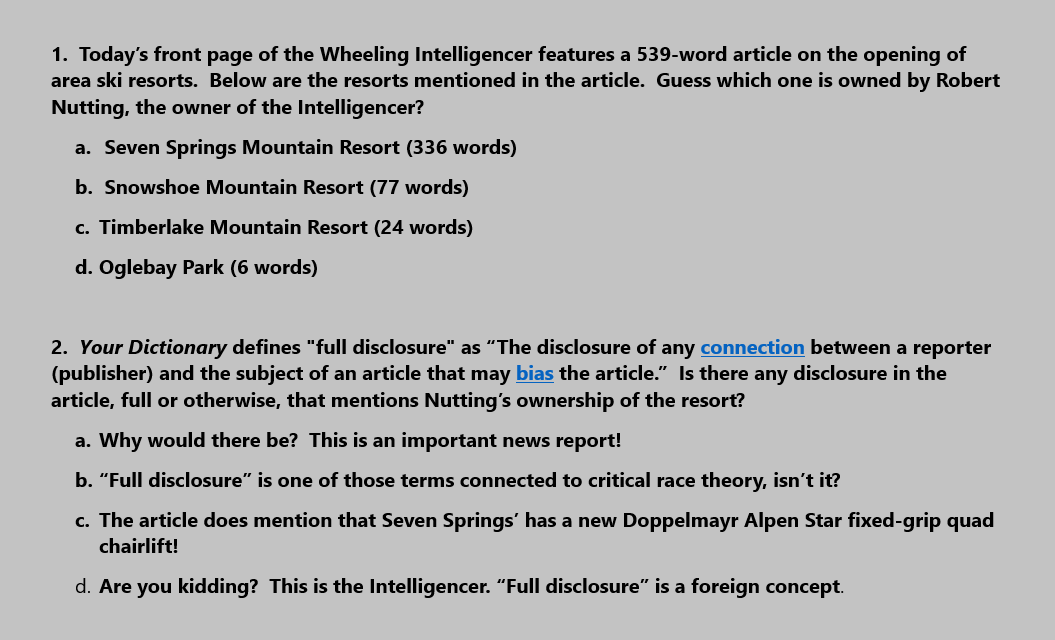 If you plug "full disclosure" into the Intelligencer's homepage search engine, the phrase appears only a few times and not as it applies to the newspaper. Media sources usually note (often parenthetically) when there may be a conflict or an appearance of conflicted interest in what they are covering. In addition to the Intelligencer search engine, an external search found no use of the term as it applied to employees of the paper or its owner.

For the record, today's article was not the first time the paper has shamelessly promoted Seven Springs without mentioning Nutting's ownership. A quick search found Intelligencer articles in past Decembers with very similar coverage. Additionally, the paper regularly treats the appearance of food trucks, wine and beer tastings, and fireworks at the resort as news stories even though the resort is almost 100 miles from Wheeling.

Beyond the lack of disclosure on Seven Springs, there were no disclosures in the paper’s numerous front page stories and editorials that promoted the baseball integrity fee when it was discussed with sports wagering in 2018 even though Nutting, who owns the Pittsburgh Pirates, figured to receive a significant financial payoff if the fee was passed. (I recently summarized it here.)

A note on my last post about Ogden's purchase of Swift Communications which expanded the Ogden Newspaper empire to include numerous newspapers in ski country. A reader suggested that one of the reasons may be because the Nuttings enjoy skiing. Possibly, but maybe the company has found an inexpensive way to promote resorts like Seven Springs and is looking to expand. Nuttings' next step might be to buy one of the cheaper western ski resorts and see if a similar synergy with his newly-acquired newspapers can be worked out.

While it's not a full disclosure issue, it's yet another example of how Ogden's papers prioritize self-promotion over news. Here's the largest front-page headline/story in today's Wheeling News-Register:

2022 Ogden Wellness Weekend is On Track

With accompanying pictures, the preview for the May 2022 event takes up over half of the front page.

And the previous leader of the Senate Democrats, Jeff Kessler, who was Senate president then minority leader after the Republicans took the majority in 2015, was known for his oratory (and full disclosure: I worked for Kessler from 2013 to 2015).

Good for him. Perhaps he could explain the term to certain Ogden editors.