Murray Energy and the Trump administration

Trump Groups Raised Millions, Then Paid It Out to Loyalists and a Trump Hotel

A pair of groups supporting President Trump say they raised $30 million last year, then spent tens of thousands of those dollars at the Trump International Hotel here and on payments to a few Trump loyalists like the former campaign manager Corey Lewandowski and the former Milwaukee County sheriff David A. Clarke Jr., according to new campaign finance reports and news reports.

The first half of article details the actions of these groups before focusing on Murray Energy:

An additional $1 million came from Murray Energy, a coal company based in Ohio that has assiduously courted Mr. Trump as it pressed the new administration to repeal President Barack Obama’s climate change policies intended to shut down old coal-burning power plants. The company had previously donated a combined $550,000 to help fund the Republican convention in Cleveland and Mr. Trump’s inauguration.

In the weeks after Mr. Trump’s inauguration, Murray’s chief executive officer, Robert E. Murray, wrote confidential memos to Vice President Mike Pence and the energy secretary, Rick Perry, laying out a wish list of environmental rollbacks, which he discussed in a meeting with Mr. Perry. The administration is on track to fulfill many of the items on Mr. Murray’s list.

Murray Energy’s donation to America First Action came about five months after Mr. Murray’s meeting with Mr. Perry. Asked whether there was any connection between the donation and the administration’s receptiveness to Mr. Murray, Gary M. Broadbent, a spokesman for Murray Energy, said that “President Trump and his administration have always supported the United States coal industry.”

You aren’t supposed to see this picture

After that meeting, a Department of Energy photographer was fired for disseminating this photo of Rick Perry and Robert Murray: 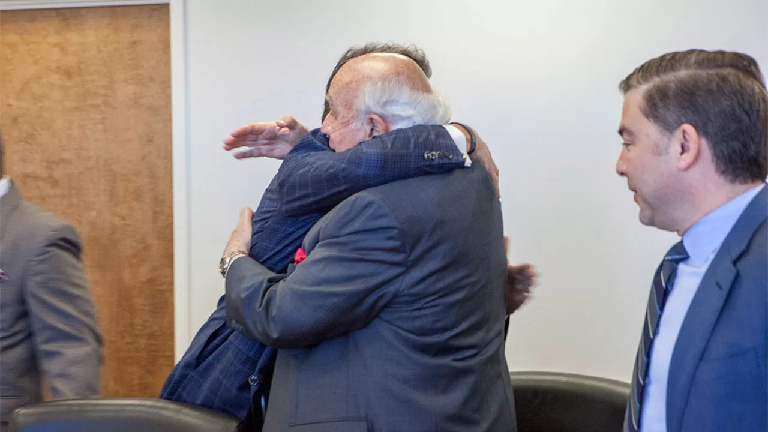 A Department of Energy photographer who was fired after releasing photos he took of a meeting between Energy Secretary Rick Perry and a prominent coal executive wants federal authorities to open a criminal investigation into what he calls “public corruption” between Perry and the industry official.

At the meeting, photographer Simon Edelman said Murray Energy CEO Robert Murray asked Perry for policy changes that would directly benefit his coal company and the executive’s personal financial position. The reason to release the photos “was to show the evidence of corruption that was taking place,” Edelman told ThinkProgress.

Edelman said he didn’t know who Murray was at the time. But he still felt something was off. “When I heard them talking about the plan and then I saw what was on the desk, my instinct was to take the photo of them,” he said.

On the meeting room table was a document dated March 23, 2017, with Murray’s name at the top. The document, addressed to Perry, stated that an “action plan” was enclosed to achieve reliable and low-cost electricity and assist with the survival of the nation’s coal industry, according to Edelman’s photo.