What about the chaperones?

Blame The Adults, Not The Teens

Where were the adults? That’s the question we ought to be asking about what happened to a group of Kentucky high school kids last weekend in Washington.

Why were the teenagers left without capable adult help in an explosive atmosphere? Who thought it was a good idea to involve them in a big demonstration staged for political purposes?

That’s the first question that should be asked and any research on Myer’s part might have yielded the answer which has been available since earlier this week. Here’s one chaperone’s account in the Cincinnati Inquirer:

Many have asked: Where were the chaperones during the confrontation between Covington Catholic High School students, Native American marchers and Black Hebrew Israelites in Washington, D.C., on Friday?

It turns out there were at least five on the scene, one of the chaperones told the USA TODAY Network on Monday.

That chaperone, Val Andreev, stands by how they handled the situation.

"There was nothing the chaperones could have done differently," said Andreev, a Hebron-resident. "I’m very proud the way the boys handled the situation."

Andreev and his 14-year-old son joined about 20 other chaperones and 240 students from Covington Catholic last week for the March for Life rally.

And from CNN, we learn that another chaperone thought that the students were “the real victims”:

"Our boys were targeted," Jill Hamlin, a Covington Catholic parent and chaperone, told WKRC without elaborating.

"They were targeted from the get-go. Immediately there were all these people running around filming," she told the station.

Hamilin added: "I can't believe they even stayed and listened to the vitriol and the hatred that was being shouted at them. As a mother, it was horrible, horrible." 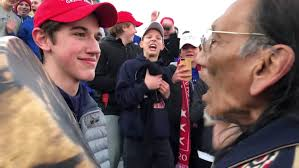 The kid was smirking, it was observed widely.

Really? Look at the video. Is that a smirk — or a high school junior who’s partly confused, partly scared and, in contrast to some politicians, not very good at the facial expressions he thinks his audience wants to see?

Sorry to disagree, but I taught high school for several years and I’ve seen that look more than a few times. That’s a smirk.

Much more important than either of our opinions, here’s what Rebecca Nagle, a Citizen of Cherokee Nation, poignantly wrote:

And I know what I saw when a calm and steadfast Native elder sang the anthem of our contemporary resistance and was mocked, jeered, and ridiculed by a throng of young, white, exceptionally privileged boys.

The privilege, the racism, the searing hate in the video is undeniable. The only question is whether or not we will call it what it is or — as so often happens — rewrite history.

Agreement with Myer on one point

It doesn’t happen that often and so I’ll call attention to it:

Using teenagers — and often, even younger children — as props for political demonstrations of any kind is, in two words, wrong and irresponsible. Some don’t even know what it is they’re protesting about. Even if they do — and admittedly, some are mature enough to have thought things through — is it intelligent to put them in the middle of rallies, marches, etc. that have the potential to become chaotic?

It is interesting to note that while Myer questions why teenagers are involved in this demonstration, he has no problem with their wearing MAGA hats. Mockingly, he writes:

Hey, it was suggested, they must be racists. Some of them wore “Make America Great Again” caps, after all.

I’m confused. I thought the boys were there to take part in a pro-life rally and not a pro-Trump rally. Why inject politics into the situation unless you want to make a statement that indirectly endorses Trump’s attitudes toward various minorities. As for racism, you might want to check-out this analysis by a clinical psychologist in the conservative business magazine, Forbes:

Covington High Schoolers: If You Don't Want To Be Seen As Racist, Maybe Don't Wear A MAGA Cap

At least twice a year, Myer writes a column deploring racism and asking what we can do about it. One is usually on the weekend before Martin Luther King Day and last Sunday's column had the usual elements: stories about his encounters with local racism and his hope that racism will soon come to an end. What neither he nor his papers have ever done, however, is to call out Trump on his racism. (If you need examples of Trump’s racist statements, here’s an excellent year-old list from the New York Times.) I wrote this last year, but I think it still applies:

President Donald Trump's comments have given the green light to racists; it’s now okay to be openly prejudiced. And while Myer claims to care about the continuing presence of bigotry and racism, his complete lack of any criticism of the president’s racist rants only serves as a reaffirmation of the president’s prejudiced words. So when Myer concludes that we need “to find a way to deal with it,” the words ring hollow. Most of us do what we can on an individual basis but few of us have the audience that a newspaper editor has. By criticizing Trump’s racist statements, this editor, who is known for his support of the president might get at least some readers to think about and question their own beliefs. Myer could do something, but he won’t. Despite what he writes, he clearly wants credit for patting himself "on the back for admitting there’s a problem."