On Fox News (where else) earlier this week:

I'm sure they're listening, Joe.

Reactions to the Brooke sign at the Perry/Brooke football game 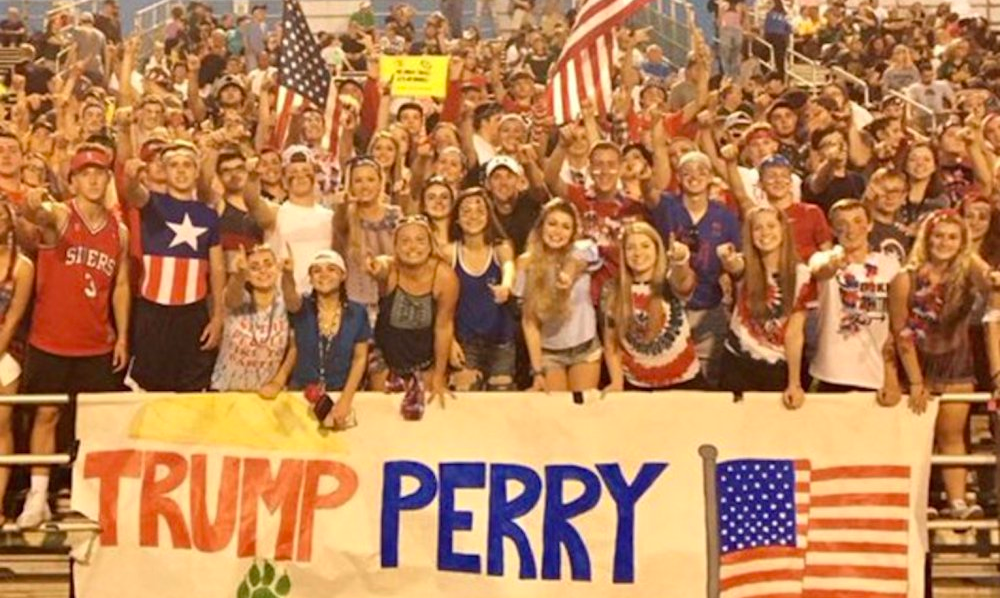 What motivated those who produced and displayed the sign? Did they intend their message to have even an edge of bigotry to it? Or was it just an innocent play on words?

The editorial appears to side with "innocent play":

High school students can be very unpleasant, offending people, especially from rival schools, in a variety of ways. We doubt seriously the sign painters at Brooke intended their work to cause the depth of offense it did.

But is it an innocent play on words? In less controversial times, the sign would have invoked the dictionary definition of the word trump, "surpass by saying or doing something better," while pairing it with the president. But in normal times with a normal president, the sign would have gone unnoticed and would probably not have been created in the first place. What makes the sign controversial is that our president, who has a long history of racist pronouncements, has recently gone out of his way to attack mostly-black pro football players. Sorry, using Trump in this context does not strike me as "innocent." (By the way, where were school officials when the banner was unfurled?)

For some, no good deed goes unpunished

The editorial does make a good point: it praises the leadership at the two schools for attempting to deescalate the event. Unfortunately, not everyone has. In the course of researching this, I found a story about the controversy on The Blaze, Glenn Beck's online site. (Yes, that Glenn Beck.) As part of The Blaze's coverage, it also links to a petition at Care2 Petitions where the reader can add his/her name to the following:

Petition to Fire or Remove Brooke County School Superintendent Toni A. Paesano Shute from the Brooke County Board of Education. Please Share. Sign and remain anonymous. This petition will be sent to State of WV BOE and news outlets.

Mrs. Shute was completely out of line and overreacted by apologizing to the "Entire Pittsburgh Perry Community" for signs at a football game between the BHS team and Perry that said "Trump Perry" in Red, White and Blue the colors of the American Flag. She took it upon herself to politicize the sign as an endorsement for President Donald J Trump instead of a creative design from a student or students. Her political correct beliefs have no place in the Brooke County School System. Children under our education system should be taught that "freedom" of expression is allowed and that the superintendent and other educators should not press upon students their personal political beliefs and political correctness. Take a stand against educators who try to indoctrinate your children into their personal political beliefs!

As of 11PM Thursday they had 190 signatures.