More Manchin stuff (none of it new)

Intelligencer stenographer Jocelyn King interviewed WV Senator Joe Manchin when he was in Wheeling last Thursday. Her story appeared in Friday’s local papers. (See two posts down.) Today, King tells us that Manchin also discussed the Democrat’s infrastructure bill and said that he would not be a part of any attempt to circumvent the filibuster. There is nothing new in the article – for the last three months, Manchin has been saying this to all who would listen. (Here he is in Politico back on January 25.) 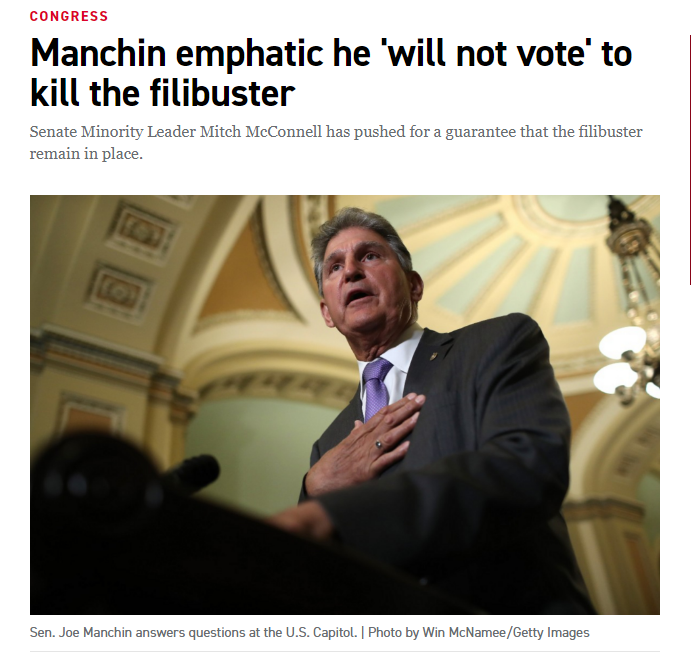 How is this news? It isn’t – it’s Monday filler written last Thursday.

Assessing the WV legislative session by talking only to Republicans

The biggest story in today’s papers has Ogden’s political reporter, Steven Allen Adams, talking to Republican leadership about the now-concluded 2021 session. And as he did when he wrapped-up the November elections, Adams ignored Democrats. I realize that Republicans control all three branches of the state government, but one would think (to at least suggest some balance) that Adams would ask just one Democratic leader how they thought the session went. (Yeah, I know, Ogden is the Republican house organ, but still . . . .) In case you’re interested, here’s local delegate Shawn Fluharty’s assessment:

Longest, most exhausting legislative session since I've been elected. Summarized below: pic.twitter.com/OIdmKJmRll

I would be interested in reading why Fluharty thinks it was a dumpster fire.

Coinciding with the election of Donald Trump in 2016, our local Ogden papers significantly reduced the number of editorials that focused on national politics. The near daily attacks on President Obama and the Democrats were replaced with editorials that featured local issues (that is, if you consider garbage dumps in Steubenville and the machinations of the Ohio legislature to be “local”). Attacks on Democrats didn’t disappear, however, as their syndicated columnists picked-up the slack. I usually don’t write about these columnists unless their outlandishness reaches a certain level.

Had Obama Not Played Race Card, George Floyd Might be Alive

Yes, Elder holds the former president accountable because of an incident early in his term when Obama criticized Cambridge, Massachusetts police for arresting an African-American who was locked out of his own home. I cannot do justice to Elder’s argument – you can read it here. Early on, Elder tells us:

Obama's own presidential victory demonstrates that America is not "systemically racist."

(I'm not sure that Obama's election proves that.) Here is the heart of his argument:

Suppose Obama encouraged Blacks to comply with the police and that if one feels mistreated, to get a name or badge number and sort it out later. . . .

Obama knows the statistics and studies. He knows there is no evidence of anti-Black "systemic racism" on the part of the police. But the political Obama knows that Black anger and resentment translate into Black votes. How many routine police encounters with Blacks escalate into something far more serious because young Blacks believe the "systemic racism" lie pushed by Black Lives Matter and their sympathizers?

No evidence of systemic racism? It is ironic that Elder's column appears on a day when most other news sources are covering two stories that would suggest the opposite. From Minnesota:

(Note -- the officer claims that she confused her gun for her Taser.)

And from Virginia (notice that Nazario follows Elder's advice but still gets pepper sprayed):

Army Lt. Nazario was driving his new car home. He was pulled over, pepper sprayed, and arrested without explanation.

This is racism. It’s about the domination and humiliation of a Black man because he asked questions and “didn’t comply.” pic.twitter.com/RFE79TjWJ8

Most other news sources (including the nightly network news programs) are carrying both of these stories. I can see how the morning Intelligencer did not cover these stories – nobody works on weekends. But there was nothing about either story in the afternoon paper. Why am I not surprised?