After reviewing November's election results, Myer wants to comment upon Trump's favorable and unfavorable approval ratings. To that end, he quotes statistics from Real Clear Politics which regularly averages national polls and comes to a consensus number.

The website has an excellent interactive graph that allows the reader to see changes in the president's consensus approval/disapproval ratings by simply plugging in starting and ending dates. I did so using the dates that Myer uses in his column and here is the graph: 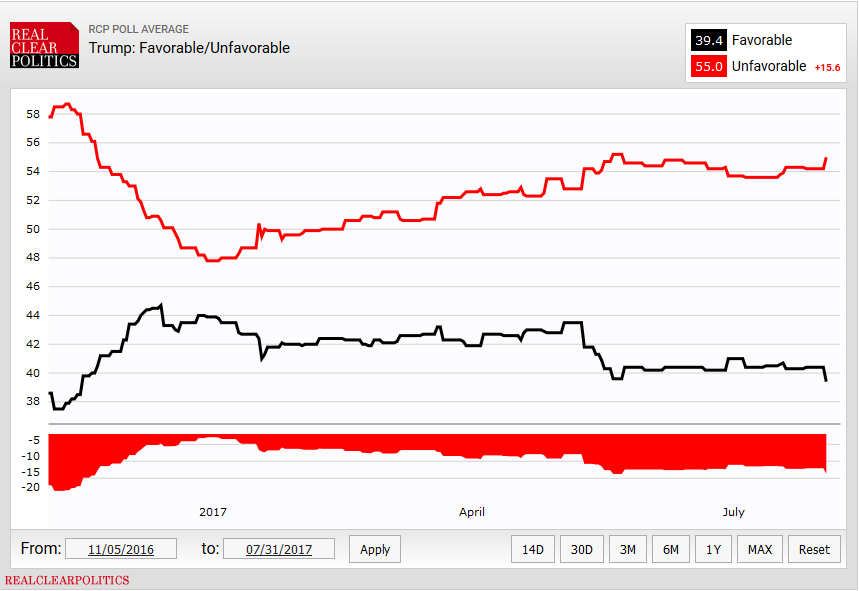 What I see in the graph is that following the honeymoon with voters which most presidents get immediately after their election, Trump's "favorable" number, which was never good to begin with, has been on a steady decline while his "unfavorable" number continues to grow. But Myer ignores any trend line to draw what I believe is an amazing conclusion:

In other words, fewer people are afraid of him and more are cheering him on. That's political power, and Trump knows it.

Myer wisely stopped at the end of July -- the news has not been good since then:

The poll found 61 percent of those surveyed disapprove of the job Trump is doing, while 33 percent approve. The president’s disapproval jumped six points since Quinnipiac’s last poll on June 29.

A particularly troubling sign for the president is that, for the first time, his approval among white voters without a college degree has hit a net negative, according to the poll released Wednesday. Fifty percent of that key voting bloc that helped propel the real estate mogul to the White House now say they are unhappy with the president and 43 percent approve.

And a very recent Rasmussen poll adds more injury and insult (especially for Trump and Myer):

New data from a conservative-leaning polling group has found that approval for President Donald Trump's job performance has hit a new low. The data revealed a lower approval for Trump than it had ever recorded for his predecessor, former President Barack Obama.

On Aug. 2, a Rasmussen Reports survey found that 38 percent of likely U.S. voters approved of Trump's job performance, while 62 percent disapproved. The data marked the lowest approval rating the polling group has recorded for the president since he assumed office.

(It should be noted that Rasmussen's poll numbers are often viewed as Republican-friendly.)

Yet Myer believes this 30+% base can vote out Democrats in middle-of-the-road districts, kick out lukewarm Republicans with challengers, and most importantly, "force Congress to do his will."

Somebody needs to cut back on Trump's Kool-Aid.

As I noted two weeks ago, Myer's has greatly expanded his definition of "the swamp" to include anybody who disagrees with Trump. He does it again, today:

Back to the denizens of the swamp: They are many, they are powerful and they are entrenched. Big business, labor unions, bureaucrats with no interest in losing their own power or their funding, liberal politicians and sometimes, even the courts are arrayed against Trump and, for that matter, reformers in Congress.

Is anybody left? (Yes, I've yet to see Myer mention conservatives and lobbyists -- both of which can be just as "powerful and entrenched" as any of the other groups on Myer's list.) But for Myer, the list is limited to anyone who disagrees with Trump.

From an Intelligencer editorial last October:

Now that penchant for imperial rule is coming back to haunt Americans.

And an earlier editorial:

President Barack Obama has no patience with checks and balances and separation of powers. When he wants something done, whether it involves environmental laws, health care or dealing with national security, he simply issues an executive order. The Constitution and the will of the people as expressed through their elected members of Congress simply are not considerations for this president.

That's interesting because as NBC News documented last month, Trump signing of executive orders has "exceeded that of any other recent president."

Today, for the first time in Trump's presidency, the words "executive orders" appeared in a Myer column or Intelligencer editorial:

Executive orders, though more potent than ever because of precedents set by former President Barack Obama, have their limits. For one thing, they can be nullified and overturned in some situations by Congress.

Of course the column expressed no condemnation, no accusation of imperial rule or expression of concern for the Constitution; what was once regularly condemned when Obama did it becomes quite acceptable with Trump. Yes, more hypocrisy from a Wheeling "newspaper."

Is there any Kool-Aid left?