Keeping up with Senator Joe 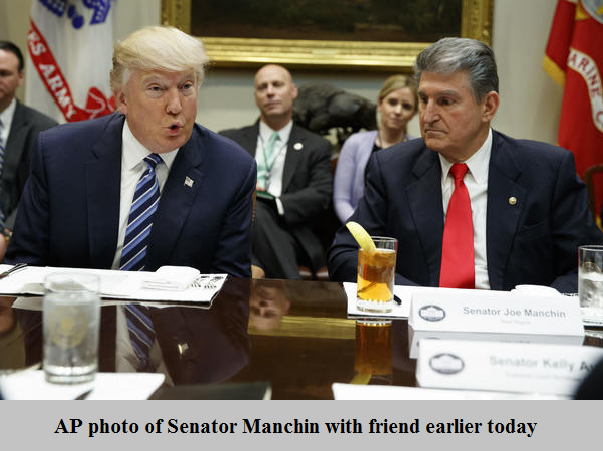 Fresh off being the only Democrat to vote for Jeff Sessions to become attorney general, West Virginia's senior senator continues to get plenty of press. Here's a sample from today's press:

Will Senate Democrats Work With Trump? The 10 Senators To Watch

(NHPR puts Manchin and Heidi Heitkamp at the top of the list.)

From the LA Times, we learn that earlier today President Trump entrusted Manchin to communicate to the press what he was thinking on the topic of immigration:

But President Trump appeared intrigued when told about the details during a lunch meeting with senators Thursday.

"Well, that doesn't (sound) like amnesty to me," Trump told the senators, according to an account from Sen. Joe Manchin (D-W.Va.) to reporters, as compiled by NBC's Kasie Hunt.

And the article I found most interesting was from The Week:

Democratic lawmakers are finally listening to their enraged base. . . .

But there is one exception: Joe Manchin, a Vichy Democrat from West Virginia, voted with every Republican to confirm Sessions. DeVos, it turns out, is the only Trump Cabinet appointment Manchin hasn't supported, a feat that makes him just as reliable a foot soldier for Trump as GOP Sen. Rand Paul. It seems like Trump likes Manchin more, too; the West Virginia Democrat was also considered for a Cabinet post, called Harry Reid's statement after Trump's election an "absolute embarrassment," and, according to the AP, Manchin has a "an open line" to Trump and some of the top figures in the administration.

Invoking the memory of Ken Hechler, the article goes on to argue that Democratic candidates can still win in states like West Virginia:

During the presidential campaign, Hillary Clinton's cringe-inducing promise to "put a lot of coal miners and coal companies out of business" killed her in West Virginia. She lost by more than 40 points. But while Trump's margin of victory was jaw-dropping, so was the fact that only 57 percent of eligible West Virginia voters actually cast a ballot. And given that Trump's promise to "bring coal jobs back" is an empty one that's sure to stir disappointment in a region that overwhelmingly voted for Trump, there's room for Democrats to put forward a viable alternative.