He doesn’t blame the trainees, he blames education. I disagree.

Last week, local editor Mike Myer argued that the “Fault Is Ours, Not Trainees.’” In that column, Myer contrasted today’s students with those who grew up after World War II:

Do younger people, not just here but in other states, understand that now? Obviously, no.

Many younger Americans don’t seem to comprehend what in many ways was the unique evil of the Nazis. Even some in Congress, who compare detention centers for illegal immigrants to concentration camps, clearly don’t understand.

What is most upsetting about the DCR trainees’ stunt is that it demonstrates they don’t realize the horror of Nazism — or they would never have posed as they did.

Myer goes on to claim that today’s students don’t learn about Nazism. He continued the argument yesterday in his column, “Flexibility To Be Uneducated”:

Well, heck, World War II was a long time ago. Why do we even need to know about those “Nazi” people?

Ask the 30 or so West Virginia prison guard trainees who are in trouble after touching a raw nerve regarding the Nazis. Some of them probably wish they’d learned more about the horror of Nazism before they graduated from high school.

I disagree. Our educational system and our culture may miss lots of history, American (our long history of racism) and foreign (Stalin’s gulags), for examples, but Hitler and Nazi Germany are not usually ignored. Toss into this TV channels (what is labeled the “History Channel” was, for a long time, what could be called “The Hitler Channel” ), and culture (especially movies) – all of which regularly remind us of what happened in Hitler’s Germany. While those trainees may not be able to tell you the importance of the Reichstag fire or the year that the first concentration camp opened, I would bet that they could tell you what the Nazis stood for. The trainees' weren't displaying their ignorance of the past; they were actively referencing it.

Coincidentally as I began this post yesterday afternoon, I stumbled onto Twitter feeds that included clips of students at yesterday’s Army/Navy football game giving the “white-power” signal. Here’s a picture of one of those students: 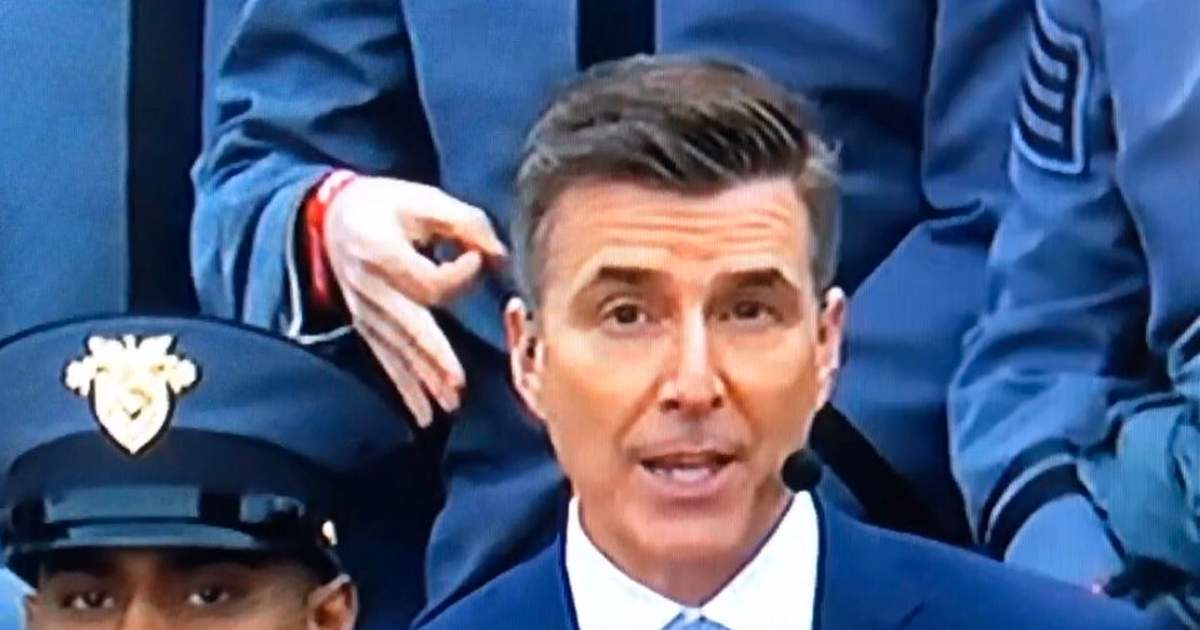 The AP report on the incident begins:

PHILADELPHIA (AP) — The Army and Navy academies are looking into hand signs flashed by students that can be associated with “white power" and were televised during the Army-Navy football game on Saturday, school officials said.

Cadets at West Point and midshipmen at the Naval Academy in the stands both appeared to display the sign during the broadcast, officials with the two military academies told The Wall Street Journal. The gesture was seen during an ESPN broadcast segment.

These students are among America’s brightest and some of them probably come from schools that are among the country’s best. Like the trainees, I believe they understand what racism and anti-Semitism is, but here they are giving the “white power” gesture. It seems to me that their actions, not unlike the WV prison trainees, fit a broader change in the culture, one that says it’s now socially acceptable to be outwardly anti-Semitic, racist, and misogynistic.

While there are probably a number of reasons for this new freedom to openly express ugly hatreds, I think the most important was the election of Donald Trump. I’ve documented the president’s racism, xenophobia, misogyny, and nativism on this blog. If you add Trump’s attacks upon civility and political correctness, which formerly were used to act as a check on these hatreds, it all becomes a broader permission slip (for those who share his prejudices) to act. In that regard, the prison guard trainees and the midshipmen/cadets flashing the white power signal are not that different.

Mike Myer clearly does not approve of the action of the trainees, but he doesn’t blame them either, preferring to indict our educational system. Sadly, his newspapers have never criticized Trump on any of these issues while he has regularly attacked liberal political correctness. That’s too bad – coming from a conservative, Myer’s words might have an impact on those who feel empowered by a president who has shown little regard for how his words have encouraged hatred and divisiveness in our society.

It was nice to see Mike Myer supporting West Virginia’s prisoners’ right-to-read in today’s column. I also agreed with him in yesterday’s column that the world history requirement ought not to be dropped by the state Board of Education (although he and I differ as to why).