Hey Intelligencer, your bias is showing

Since the story originated with the Associated Press, I googled a phrase from this morning's front page Wheeling Intelligencer article on Democrat Joe Manchin's fundraising efforts. The search yielded 121 hits at 11 AM this morning. By looking only at the headline, see if you can spot the Wheeling Intelligencer link on my screen grab of the first page of Google's search results: 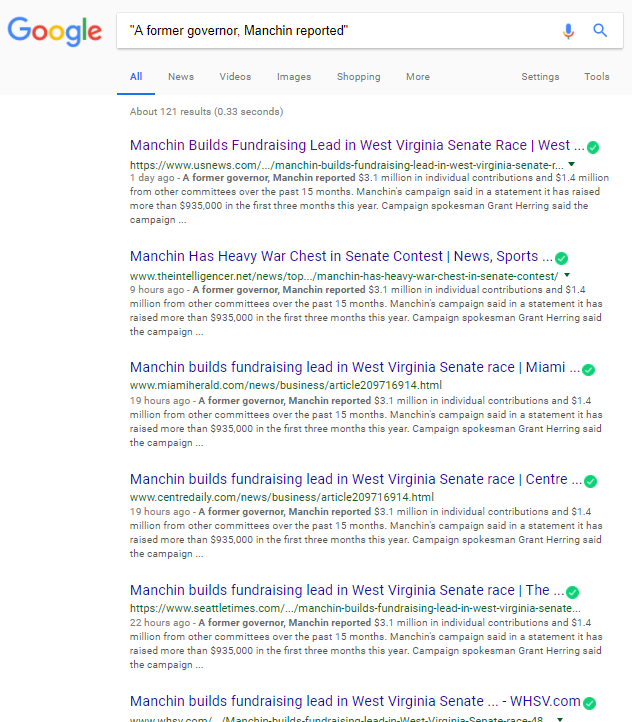 I took a few minutes and checked out the thirteen pages of results. Of the 121 news sources that carried the story, 120 had the following which I assume was the AP's default headline:

The one exception was the Wheeling Intelligencer:

Compare the two headlines: The AP's is a statement of fact based upon verifiable information while the Intelligencer's is subjective (what "heavy" means) while using biased language (Manchin doesn't have "campaign funds," he has a "war chest").

Research has demonstrated again and again that most readers never get past the headline and that works to the Intelligencer's benefit. My first post on this blog over four years ago was about a biased Intelligencer headline. Those biased headlines haven't gone away and if anything, they appear to get worse during election years. I'm sure we will see more.

The Wheeling News-Register used the same AP story with this headline: