Who cares -- it's just a theory

As of 10 AM this morning there were 4250 sources that carried this AP report:

Not surprisingly, the Wheeling Intelligencer was not among them.

Here is what the AP did:

At the request of The Associated Press, eight climate and biological scientists graded for scientific accuracy what a dozen top candidates said in debates, interviews and tweets, using a 0 to 100 scale.

To try to eliminate possible bias, the candidates' comments were stripped of names and given randomly generated numbers, so the professors would not know who made each statement they were grading. Also, the scientists who did the grading were chosen by professional scientific societies.

And here is the scientists' conclusion:

When it comes to climate science, two of the three Democratic presidential candidates are A students, while most of the Republican contenders are flunking, according to a panel of scientists who reviewed candidates' comments.

Here is the AP chart that accompanies the article: 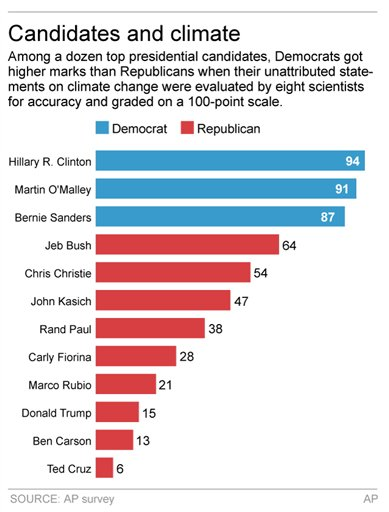 I wonder: if the scientists tested newspapers, would the Intelligencer outscore Ted Cruz? I'm serious.