Exploring the connection between West Virginia's floods and climate change 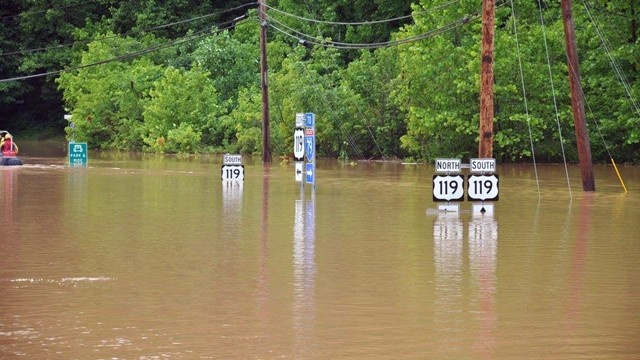 Okay, climate and weather are different but climate obviously has a long-range effect on the weather. During and after the flooding which consumed large parts of West Virginia last month, a number of sources explored the connection between climate change and the incredible amounts of rainfall that fell on a large percentage of our state. Here is what those sources concluded (the bold emphasis is mine):

Early-on (June 27) in the flooding, an Associated Press report suggested that climate change may have been a contributing factor:

Man-made climate change may have added to the disaster. The part of the USA that includes West Virginia has seen a 71% increase in extreme precipitation since 1958, according to the National Climate Assessment.

(Note -- while our local "newspapers" did cover the flooding, they did not use this particular story. I did not see any reference to climate change in any locally-used AP report on the flooding.)

Ken Silverstein in Forbes on June 30 examined the connection between coal and climate change:

For a state that has been racked with recession and unemployment, the flash floods that have ravaged West Virginia don’t help much. But the key question to ask — no matter how unpleasant — is whether the coal sector there shares some of the blame.

At issue is the concept of climate change and whether the warmer atmosphere is holding more water and therefore intensifying the storms. To that end, West Virginia’s prime industry has been coal, a fuel that when burned is responsible for a third of all human-induced carbon emissions.

Even more, the surface mining that has occurred is lopping off whole mountaintops and removing the vegetation, leaving the landscape vulnerable to erosion. The water running off the mountain is thus more rapid, adding to the problem of flash flooding, says Kathleen Miller, a scientist with theNational Center for Atmospheric Research in Boulder, Colo., in a phone interview.

“The climate is highly variable and you can’t attribute specific events to climate change,” adds Dr. Miller. “But when you look long term, many environmental changes are all pointing in the same direction and supporting the conclusion that global climate change is underway: melting sea ice, melting glaciers and rising sea levels. “It is the weight of the evidence that must be considered.”

It’s an existing problem that climate change may make worse. According to the National Climate Assessment, heavy downpours have increased nationally over the past three to five decades, especially in the Midwest and Northeast (which, in their analysis, includes West Virginia). The trend is expected to continue: warming temperatures due to climate change are projected to increase extreme precipitation for all U.S. regions.

For mountainous regions like West Virginia, increases in extreme precipitation also mean a greater flood risk, especially in valleys where water collects. As the current flooding has shown, the power of water can be immense, destroying lives and livelihoods even with advanced warning.

And from Ken Ward Jr. on July 4 in the Charleston Gazette-Mail:

Explained simply, warmer air holds more water, leading to stronger and more frequent heavy precipitation events. Confidence in the link between heavy rain and climate change is strong partly because there is a relatively direct connection between a more moist atmosphere and human-induced warming. This relationship is not as direct as for an increase in temperature, but more direct than for something like a tropical cyclone.

“One of the robust predictions of climate science is that the heaviest rain events will become more frequent as the climate warms,” said Andrew Dessler, a professor of atmospheric sciences at Texas A&M University. “We have good statistical evidence that this is indeed occurring.”

. . . .“This is one of our most confident expectations for the outcome of continued global warming,” said Ken Kunkel, a climate scientist at North Carolina State University and NOAA’s National Climatic Data Center. “Global warming will, with almost complete certainty, lead to higher amounts of water vapor in the atmosphere.”

Finally, I would also reference an article at WV Public Broadcasting from July 1 that makes some of the same points.)