Explaining the music at Trump events

Cluelessness? Their sense of irony surgically removed? Accidents? Trolling by event staff? All of the above?

I saw the following as I was reviewing Trump’s recent rallies -- it’s from the beginning of yesterday’s Trump rally in Michigan:

Oh, the irony (pay attention to the lyrics) pic.twitter.com/hAmzO3uSZi

Okay, John Fogerty’s caustic, “swamp rock” lyrics were not specifically about Trump although they certainly apply to his history. But who chose "Fortunate Son" to play at a Trump rally?

There are other examples?

“Knockin’ on Heaven’s Door” is playing at Trump's event in NC. pic.twitter.com/If8R2iCwjW

(Notice that nearly everyone is mask-less and getting an early start on "knockin'".)

And here’s a headline from The Guardian in May:

Additionally, there’s “You Can’t Always Get What You Want” and “Macho Man” which was recently played at a Pence rally.

As to the “why” of the music choices, I think I could make a case for most of the answers I suggested in my subheading. Another possibility comes to mind, however -- the Trump staff chose to ignore lyrics in favor of familiarity and perhaps, the “sound” of the song, figuring that most of their audience does not pay much attention to a song’s actual lyrics. To use an earlier example of misappropriation from the 1984 Republican Convention, Springsteen’s “Born in the USA,” with its anthem-like chorus, “sounds” like a patriotic song. Similarly, Fogerty’s southern hard rock "sounds" in-your-face and politically-incorrect. That its target was anyone like Trump who used his/her money and connections to dodge the Vietnam War is probably inconsequential to those in attendance -- it "sounds" tough (like Trump).

Finally, early in yesterday's Michigan rally they played the theme song from the movie “Titanic.” (If you haven’t seen the movie, it doesn’t end well!) Hearing the song reminded me of a poster I saw a couple of weeks ago: 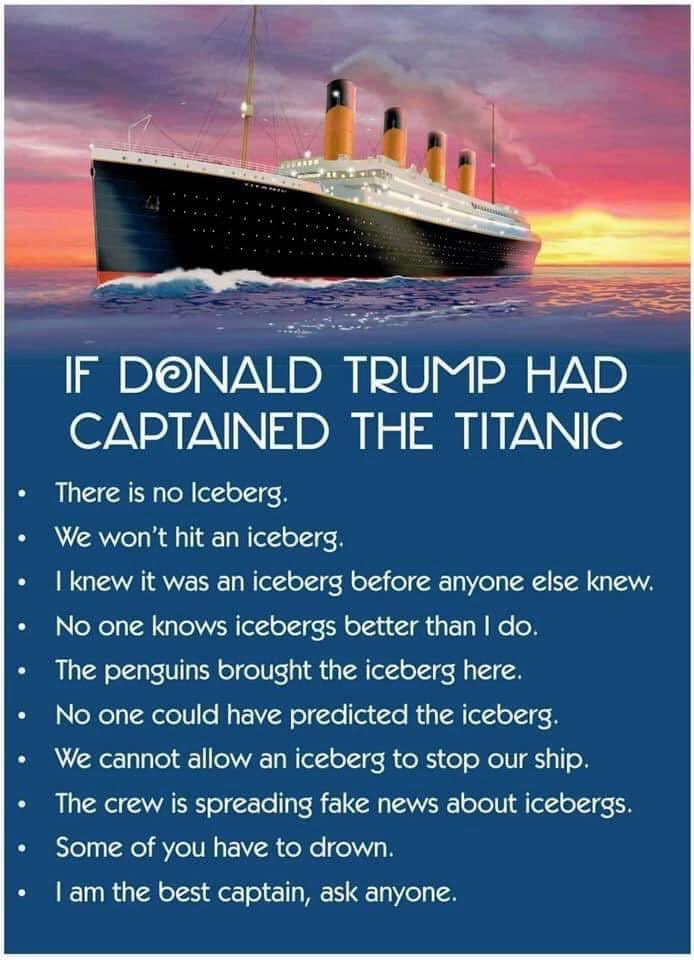