Newspapers on the cheap: A look at today’s Wheeling Intelligencer

When was today's front section assembled? Last Friday? Today’s front page has stories on the local police department looking for applicants, the county’s Humane Officer retiring, a local county commissioner deciding to run again, the new president of Marshall University, and a 2,300-word feature story about a Weirton woman learning about a relative who was a POW during World War II. Did any of these stories happen within the last 24 to 48 hours? I don't think so. Most notably missing is any coverage of the House of Representatives passing a huge infrastructure bill early Saturday morning. I am sure many readers would like to know what was in the bill. Additionally, I would think that there would be considerable local interest in why our local congressperson, David McKinley, ignored his own party and supported the bill. (By the way, there was just one national story in today’s front section – an AP article on school’s encouraging vaccines.)

The editorial page was only slightly better thanks to Thomas Minney and Beth Wheatley from the Nature Conservancy who contributed an op-ed on WV’s economic opportunity. That was balanced by yet another narcissistic column by Larry Elder – this time on some of the letters he received while running for governor in California.

The page also included two three-week-old editorials from other Ogden papers. Of course, one was yet another irrelevant Ohio editorial -- this time, on something called Aisha’s Law. The editorial tells us:

Boyd is hopeful it could go to a hearing next week and then on to a vote on the Ohio House floor.
Lawmakers should all be on board to get this done.

Sorry, Intelligencer, but they are already “on board” and got it done as Cleveland’s WJW told us on October 27:

House Bill 3, also known as Aisha’s Law, has overwhelmingly passed through the Ohio House of Representatives. 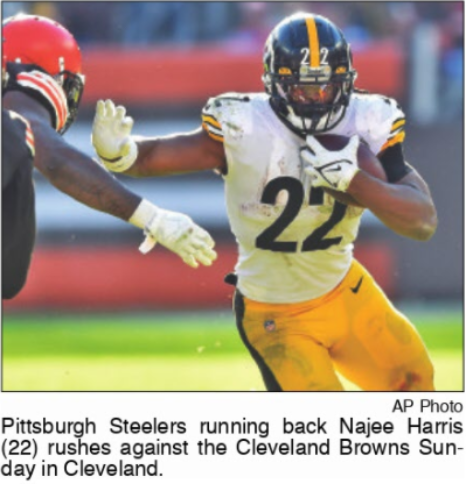 Note -- the Pittsburgh Steelers’ Najee Harris did not play against the Cleveland Browns (or any other team) yesterday. Harris and the Steelers play the Chicago Bears tonight. Hey, but like Ohio editorials, the picture takes up space.

Posted in: newspapers on the cheapwheeling intelligencer editorial