On Wednesday night, West Virginia governor Jim Justice gave his first State of the State address and most of it was dedicated to the state's budget crisis. Not surprisingly, the local "newspapers" reacted negatively to the suggestion of new taxes. As the battle of the budget unfolds, I hope to write about how it's covered locally.

Thursday's top of the page story fairly explained Justice's proposal as outlined in his speech. In an included chart, it summarized how revenue would be increased and it documented his proposed cuts. What it didn't do was to document what the governor saw as the alternative. (Note: I realize that this is not an either/or proposal and that the final budget will likely be something in-between. What I am objecting to here is the locals' unwillingness to report what the governor saw as the alternative to no new taxes -- something that a balanced news story about the governor's address would certainly have included.) Here are the cuts that the governor's office says would need to be made in order to balance the budget without new taxes: 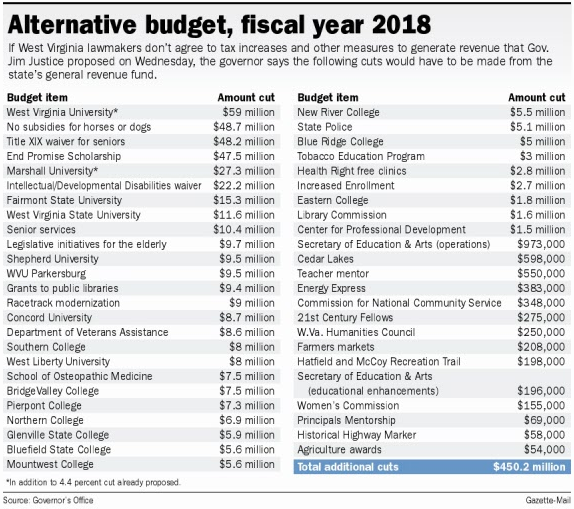 From my limited perspective on some of these budget items, the effects of this deep of a budget cut would be devastating and yet there is no mention of any of this in two days worth of coverage.

(2) The locals have also been quick to suggest that there is already widespread opposition to the possibility of new taxes or revenue sources. Thursday's front page headline told us that

Some Lawmakers Disappointed By Tax Proposals

The long article (by local standards) documents why three local Republican lawmakers were disappointed. (No supporter or Democratic lawmaker is mentioned as in "on the other hand.") As a follow-up, this morning's Intelligencer tells us that

The article then quotes extensively from two Republican legislative leaders. Apparently, if you're a Democrat, you can't be a leader. For that matter, you may not exist -- no Democrat, other than the governor, is mentioned. (Note -- the afternoon paper did change the headline to "W.V. GOP Blasts Governor's Tax Plan.")

Finally, today's Intelligencer contains what I'm sure will be the first of many editorials on the budget. The editorial tells us that "Justice Breaks Tax Promises" and, among other things, it asserts a cost figure without explaining how it was computed:

The governor is proposing tax and fee increases of $600 million a year. That amounts to more than $1,320 for a family of four in our state.

(I have no idea where they got this figure.)

Beyond advocating the elimination of "waste" and some bureaucrats (both of which would hardly make a dent in the deficit), the local papers haven't had much to say about how to solve the budget crisis. C'mon, locals, if you want "no new taxes," tell us which state agencies and/or state universities you'd severely cripple or wipe out entirely.