The University of Texas at Austin recently released a new poll tracking American's attitudes toward energy sources. According to medium.com

A new poll from the University of Texas at Austin shows that large majorities of Americans support renewable energy like solar, while coal is considered “the worst” energy source by more Americans than any other form of energy.

The poll also found that more than 3 out of 4 Americans acknowledge climate change is occurring (including most Republicans), and that opposition to coal translates to support for candidates working to move us away from coal. The press release announcing the poll notes that “52 percent of survey respondents say they are more likely to vote for a candidate who supports reducing coal as an energy source, up from 43 percent in March.” Just 15% of those polled said they would be “less likely” to vote for such a candidate.

Here is the graph on how it will affect voting: 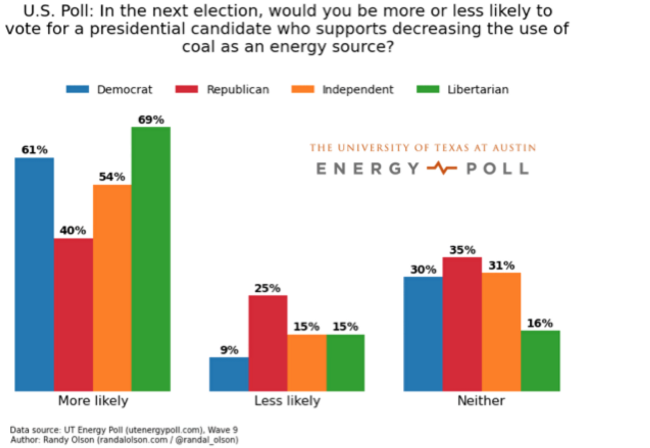 Americans’ persistent negative attitudes toward coal suggests that the public relations efforts of the US coal industry have largely failed to improve its image. In fact, the head of the National Mining Association, a lobby group representing coal mining companies, admitted in 2013 that their central message didn’t work, acknowledging, “Anyway, war on coal never resonated with much conviction among ordinary Americans. For them, the EPA keeps the air and water clean, their kids safe.” Another coal industry group, ACCCE, was recently forced to downsize its lobbying and public relations efforts. And while there’s certainly plenty to ridicule about the coal industry’s PR efforts, in all fairness it must be pretty tough when so many people think your product is “the worst.”

The state of West Virginia is wasting valuable time and money (see our attorney general's most recent law suit) by continuing its support for a lost cause. It is time for West Virginia to begin the process of moving on.

You can find the original University of Texas poll here.

She tells NHPR’s Morning Edition that leaders in her own party are wrong to try to block the plan from taking effect.

She may be the first but she won't be the last. (By the way, Ayotte is up for re-election next year and she faces a challenge from the state's Democratic governor who has already endorsed the Clean Power Plan.)