The annual “CNBC Top States for Business” was released earlier today and West Virginia's ranking stays near the bottom.

One of the reasons I follow the CNBC ranking is that they’ve been doing them for a number of years which makes year to year comparisons easier. Here is a chart that I’ve worked up from their data. 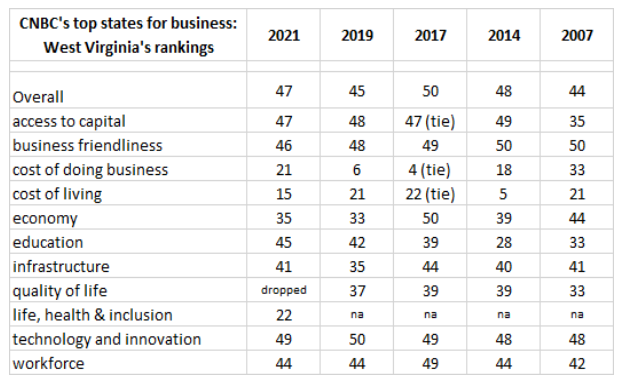 For comparison’s sake, I’ve included this year, the previous last year that the survey was done (2019 – no rankings last year due to covid), 2017 (the year after the Republicans passed major business-related legislation), 2014 (the last year that the Democrats controlled both the executive and legislative branches), and 2007 (the survey’s first year).

It’s not hard to see that, with a couple of minor exceptions, West Virginia’s rankings have not significantly changed over the years. This relative consistency of rankings is despite a major change in who controls the legislative and executive branches. Through the last decade, the Republicans regularly ran on making the state "pro-business" and to that end, they passed major legislation (right to work, prevailing wage, and other business-friendly laws) upon taking over the legislature. Has it made a difference? I’m not an economist but the CNBC numbers do not reflect any seismic shift in how the state’s business climate is perceived. I would argue that other factors are also important. (To that end, I notice that CNBC has apparently enlarged it “quality of life” and now calls it “life, health, and inclusion.”) More on that tomorrow.

By the way, Virginia is ranked #1, North Carolina is #2, and Utah is #3. Maine, Hawaii, and Alaska fall behind West Virginia.

Some interesting comments from the twittersphere:

Sounds like we could learn a few things about nurturing and retaining our workforce.https://t.co/8ebPTMPo6t