Clash of the Titans: Coal and natural gas battle over future power plants and a local “grass roots organization” is a major player

Is there any local coverage?

Before there was “fake news,” there was “astroturfing” from “grass roots organizations”

I’ve written about astroturfing on several occasions. Here’s how I first explained it:

The Online Slang Dictionary defines astroturfing as "the creation of lobbying groups that appear to be separate from corporate interests, but that are actually funded by them. As opposed to "grassroots" political activism." The origins of the word most likely came from the first baseball field with fake or artificial grass (it didn’t have "grass roots") – the Astrodome which used "Astroturf." Thus, astroturfed material appears to come from real grassroots action but it is actually fake. If you've ever read product reviews online, you’ve probably been astroturfed. Letters to the editor are sometimes examples of astroturf. Organizations, often with noble-sounding names that appear to have our best interests at heart but are really serving others, would be another example.

Two years ago, I wrote about some local astroturfing promoted on the front pages of our local papers. The Intelligencer headline read:

And the subheading told us:

In my blog post, I expressed skepticism that this was a “grassroots” organization; more likely it was an astroturf group funded by a coal company or coal association. Funded because, as the Intelligencer article explained, the group was planning lawsuits to prevent the construction of natural gas power plants.

What has happened to this “grassroots” organization?

That was two years ago, the Alliance is still around, and they still consider themselves to be grassroots. From their Facebook page:

The Ohio Valley Jobs Alliance is a grassroots organization and movement whose mission is to promote and protect the good paying jobs in the Ohio Valley.

They’ve been active in Brooke, Marshall and Harrison Counties. They’ve also been filing lawsuits to prevent natural gas power plants from being built. (As I questioned in my original post, where does a “grassroots” organization come up with the money to file lawsuits?)

One such suit is in Harrison County. As WV News reported recently:

A proposed power plant project in Harrison County is getting closer to becoming a reality, according to its developers.

John Black, vice president of development for Energy Solutions, said the Harrison Power Natural Gas Power Plant has only one remaining obstacle standing in the way of the start of construction.

“We’ve been working for three years to bring a power plant development project to Harrison County, and we’re getting close,” Black said. “We have all of our permits lined up. We have the site lined up. And we’re ready to go with one hurdle to clear.”

That hurdle is an appeal, filed by the Ohio Valley Jobs Alliance, against the project’s air permit, Black said.

According to allegations from Black and his colleagues, the organization is backed by Murray Energy Corporation, one of the largest independent operators of coal mines in the United States.
Robert E. Murray, chairman, president and chief executive officer of Murray Energy, has denied those allegations.

“The Ohio Valley Jobs Alliance (OVJA) is a grassroots organization that seeks to preserve coal jobs in the Ohio Valley,” Murray wrote in a July email to The Exponent Telegram. “While we certainly support their mission, we have not provided financial support to the organization, other than assisting them with certain legal fees. OVJA members have the welfare of the people of the Ohio Valley as their first priority, as they work to preserve these jobs and family livelihoods. We are pleased to support their efforts.”

The battle has escalated. Yesterday’s Wheeling News-Register had this half-page ad on A7 paid for by The Affiliated Construction Trades: 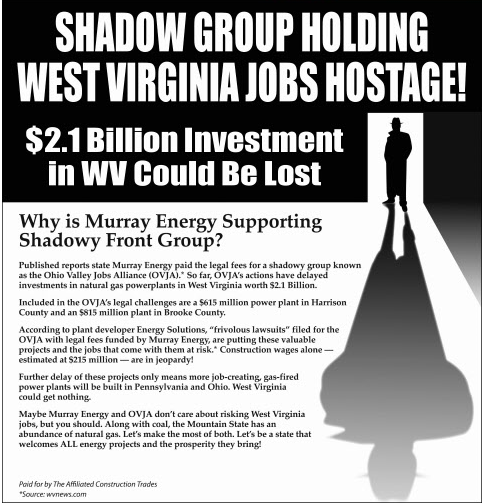 How has this battle between natural gas and coal been covered in the local papers?

For the most part, it hasn't: the paper's online search engine has no references to the Ohio Valley Jobs Alliance after November 2017.

Didn't we just read an editorial on Friday that told us:

Our emphasis is and always has been accurate accounts of what is going on in the Ohio Valley and elsewhere in West Virginia and Ohio.