Is it a sign of the apocalypse? What’s next? Undoing “right-to-work” laws? Paying teachers and other state workers a living wage? Never mind, it’s about the Party’s unswerving loyalty to Donald Trump

The Rucker quote neatly states the West Virginia Republican Party’s (along with its messenger - the Wheeling Intelligencer) long-term justification for tort reform. (For more examples, type “West Virginia” and “frivolous lawsuits” into a search engine and see how many hits and how far back the search goes.)

West Virginia Attorney General Patrick Morrisey issued a statement Wednesday involving his decision to join an effort that urges the U.S. Supreme Court to consider what he describes as “irregularities and unconstitutional actions in this year’s election.” https://t.co/fnG3RxA5tV

“Today, I am announcing my support of Texas’ request before the U.S. Supreme Court to consider the many irregular, highly problematic and unconstitutional actions that have occurred in the states during the 2020 elections. We are joining a brief with a number of my colleagues, which will be filed at the U.S. Supreme Court this afternoon.

“America and West Virginia deserve to get to the bottom of these really troubling issues. I urge the U.S. Supreme Court to carefully consider Texas’ and the states’ requests.”

Of course, Morrisey does not detail these “many irregular, highly problematic and unconstitutional actions” because he can’t. As University of Washington law professor Lisa Marshall Manheim summarized in an op-ed in today’s Washington Post:

The litigation is legally incoherent, factually untethered and based on theories of remedy that fundamentally misunderstand the electoral process. At the core, it is an uninspired retread of the many state-level claims that already have imploded since Nov. 3. Texas has simply delivered these defective claims in an even worse package.

What about West Virginia Republican Secretary of State?

Hello, West Virginia Secretary of State Mac Warner. What brings you to this pro-Trump rally outside of the state Capitol? pic.twitter.com/4khAs39sjn

A nice touch – Warner shows that his allegiance isn’t to voters in West Virginia and across America; it’s to Donald Trump.

So why the lawsuit?

This lawsuit is really about casting doubt on the legitimacy of the Biden presidency. A significant number of Trump supporters and Republicans have already bought the lies about a rigged election. For them, the suit, regardless of its likely outcome, will only reinforce that view. For others, it may raise doubts -- especially when it gets reinforced in Republican propaganda outlets like Fox News and the Wheeling Intelligencer which ran this political cartoon earlier today: 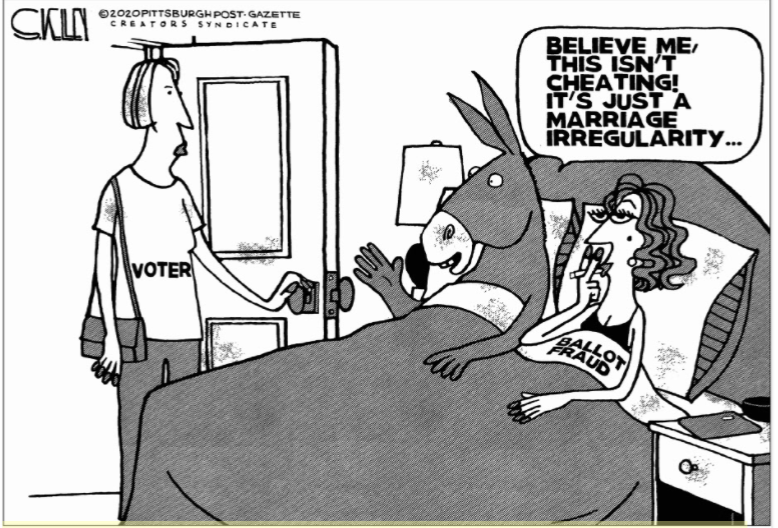 (The Intelligencer would like you to ignore the fact that it has not documented even one example of "cheating" or voter fraud.)

“It’s easy to file a frivolous lawsuit when you have nothing to lose and everything to gain.”

Republicans have proven you right on this one, Senator Rucker.