Which candidate will get 5-in-a-row first?

Assign a card to each of the candidates and fill the space as they say the words: 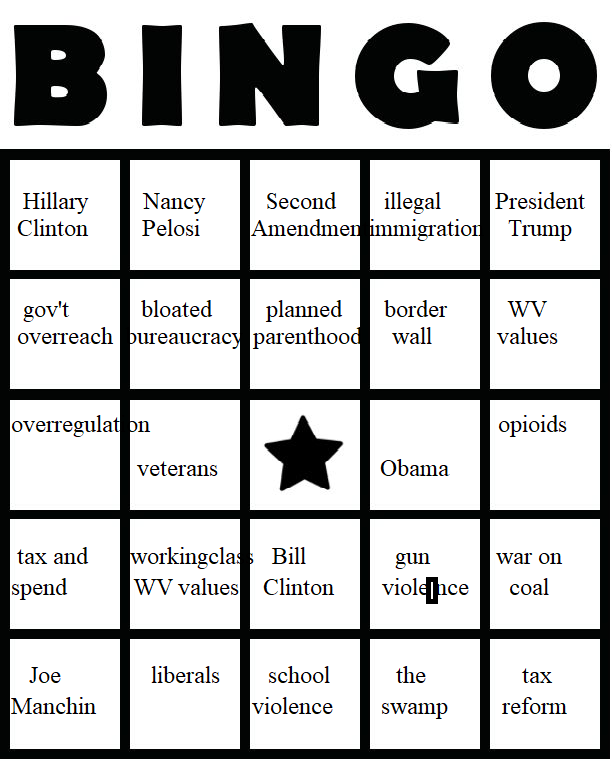 First to get five-in-a-row wins!

According to my bookie, here are the current odds on winning:

(Warning -- BINGO card should not be use as part of a drinking game -- participants will quickly become intoxicated.)

No one candidate got five-in-a-row. Covering the most squares was Morrisey (14), Blankenship (10), and then a tie between Jenkins and Willis (part of the field) (7).

A couple of reactions

I found Blankenship and Morrisey's responses to be predictable.

Jenkins didn't just tie himself to Trump, he promised to be his human shield. Early in the debate, he vowed to be a "roadblock" to make sure that the president would not be impeached. (Hey Evan, why don't you wait until the various investigations have completed before making such promises.)

In answering a question on guns, Candidate Jack Newbrough confessed that he was carrying a weapon. (Afterall, West Virginia is an open-carry state.) I thought maybe I misunderstood him but then he repeated it later. I'm sure everyone in attendance felt safer with that news.

At the end of the debate, Mike Myer couldn't pass-up an opportunity to take his own shot at the primary winner's likely opponent, Joe Manchin. Myer noted in closing that he didn't get a chance to ask them his final question: "Would you please say something nice about Joe Manchin?"

A suggestion to Mike Myer: why don't we get a chance to "size up" the Democrats running against David McKinley?

The Intelligencer's justification for holding the debate was stated by Myer earlier this month:

“We West Virginians like opportunities to ‘size up’ people running for public office. There’s nothing like an in-person forum, at which candidates answer sometimes tough questions on themselves and public policy, to make that happen.”

A final question for Editor Myer: If Ogden papers are "fair and balanced" and willing to give candidates an opportunity to be heard, when will we see a debate among the Democratic candidates running against Congressional District 1's Republican Representative David McKinley? You know, so we can size them up.

I think I know the answer.