Bill Maher on Joe Manchin: "For a Democrat, he is the most powerful Republican in the Senate" (with 6/13 update) 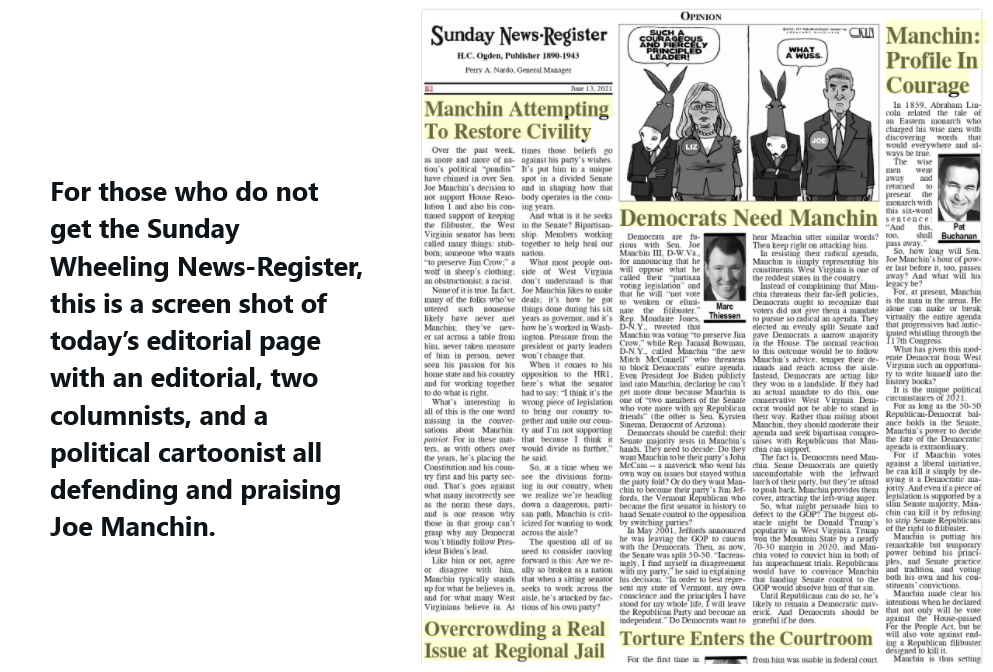 Little did I know when I wrote yesterday’s post on our local papers’ love affair with West Virginia’s senior senator, Joe Manchin, that today's Wheeling News-Register would dedicate most of its weekend editorial page to even more praise. Here are the lowlights:

Why? Because Manchin “stands on principle” and will not support ending the filibuster. I guess that it was another principle that Manchin was standing on when he cosponsored a bill in 2011 that “eliminated the filibuster on motions to proceed to a debate on the substance of the bill; eliminated secret holds.”*

Thiessen, playing the role of “concern troll,” first warns Democrats that they need to be careful with Manchin; Thiessen then argues for Manchin to switch parties and become a Republican. Be careful what you wish for, Mark, narcissists have no allegiance to party or principle and their only commitment is to themselves.

These two events are similar, but I’m not sure they are analogous. The cartoon might have had more meaning had the Republicans not demoted Cheyney – something that Democrats have yet to do with Manchin.

An editorial argues that Manchin is “attempting to restore civility”

The editorial cannot heap enough praise on Manchin. (I cannot remember any Senator Capito or Representative McKinley editorial that lays it on as thickly as this one does.)

The long editorial begins by criticizing his critics who

likely have never met Manchin; they’ve never sat across a table from him, never taken measure of him in person, never seen his passion for his home state and his country and for working together to do what is right.

(And he puts his pants on one-leg-at-a-time!)

They’re in awe and it gets worse:

What’s interesting in all of this is the one word missing in the conversations about Manchin: patriot. For in these matters, as with others over the years, he’s placing the Constitution and his country first and his party second. That’s goes against what many incorrectly see as the norm these days, and is one reason why those in that group can’t grasp why any Democrat won’t blindly follow President Biden’s lead.

Like him or not, agree or disagree with him, Manchin typically stands up for what he believes in, and for what many West Virginians believe in. At times those beliefs go against his party’s wishes. It’s put him in a unique spot in a divided Senate and in shaping how that body operates in the coming years.**

And Manchin, according to the editorial, loves to make deals:

What most people outside of West Virginia don’t understand is that Joe Manchin likes to make deals; it’s how he got things done during his six years as governor, and it’s how he’s worked in Washington. Pressure from the president or party leaders won’t change that.

At this point in the editorial, the reader needs to see some proof -- examples of Manchin-the-dealmaker. Where is it? As for when Manchin served as governor – despite the editorial’s assertion, there probably weren’t many bipartisan deals of consequence during those six years because Democrats controlled both houses. What about Senator Manchin? After 10 years, what important bipartisan legislation has his name on it? Or what deals has he brokered? In 2013 after Sandy Hook, Manchin did work with Republican Pat Toomey to sponsor an amendment requiring background checks. Unfortunately, there were not enough bipartisan Republicans to overcome the 60-vote filibuster threshold and it lost despite receiving 54 votes. I could find nothing else to suggest that the senator is, or has been, a dealmaker. Obviously, Manchin likes to be known as one; unfortunately, he’s produced few, if any, results.

A final note on Manchin and bipartisanship -- we should be careful taking Manchin’s word on claims of bipartisanship: in an interview with an Intelligencer reporter last April, Manchin asserted that the American Rescue Plan was an example of bipartisan legislation. Manchin lied – not one Republican senator voted for the legislation.

*Along those lines, Manchin sometimes claims that his actions follow the footsteps of predecessor, Robert Byrd. That’s also disputable -- earlier this year, NBC News published an op-ed that clearly refutes that premise:

**I’m saving these two paragraphs for future use.

On page 3A, they have this op-ed by Betty Rivard: 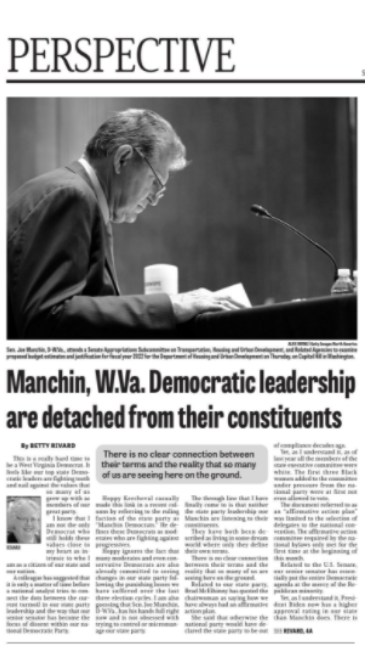 And on page 4A, they carry syndicated columnist E.J. Dionne's most recent column:

Manchin must help save democracy