America must go back to work -- NOW!

For the Wheeling Intelligencer, there are no other points of view

I had planned to blog about something else today but then I turned to the Wheeling Intelligencer’s editorial page and saw all three of the paper’s syndicated columnist making the same point: regardless of the consequences, we need to get America back to work now. (These follow a similar column yesterday.)

Get Most Back to Work, Protect Those Most Vulnerable

That sums up his plan. And the virus won’t multiply among those working? And then spread to others? Here’s one example from South Dakota where the Republican governor has refused to issue a shelter-in-place order. As NBC News reported yesterday:

Over 500 employees at the Smithfield pork-processing plant have tested positive for the virus, and the factory, which employs 3,700 people, was shuttered until further notice over the weekend. Over 100 nonemployees in the area have gotten sick after having come into contact with the plant workers, the Argus Leader newspaper reported, citing data from the state Health Department.

Then there is Pat Buchanan’s column:

Deciding How Far We Will Go

Buchanan's column uses rhetorical questions (12 to be exact) and frequently begs the question instead of making arguments. Here’s a sample:

Can a nation that will accept depression that destroys the livelihoods of millions of its citizens be credible when it warns another great power that it is willing to fight a nuclear war – in which millions would die – over who rules the Baltic states or who controls the South China Sea?

Huh? Ignoring his questions, this seems to be his thesis:

To save Americans from contracting a virus that may kill 1-3% of those infected, we have put America on a ventilator.

(Hey Pat, it might not happen – thanks to your favorite president, ventilators are in short supply some places.)

Finally, there is yet another Town Hall columnist, Marina Medvin, who wants to use much-less-restrictive Sweden as evidence that there is little difference in the spread of the virus when compared to countries like America that used a “mass hysteria” (her words) response. Her column

cites a study from Tel Aviv University’s Yitzhak Ben Israel which argued that the virus followed a similar path in every country regardless of the steps that the country takes to blunt its effects*. Israel looked at the rate of infections in several countries and found:

The numbers told a shocking story: irrespective of whether the country quarantined like Israel, or went about business as usual like Sweden, coronavirus peaked and subsided in the exact same way.
In the exact, same, way.

His graphs show that all countries experienced seemingly identical coronavirus infection patterns, with the number of infected peaking in the sixth week and rapidly subsiding by the eighth week.

Obviously, the study is very dependent upon how well a country is testing its citizens; here, as you're probably aware, the U.S. is not doing a good job. Ben Shapiro (above) admits that America doesn't know how many people have the virus. Additionally, here’s yesterday’s New York Times:

As President Trump pushes to reopen the economy, most of the country is not conducting nearly enough testing to track the path and penetration of the coronavirus in a way that would allow Americans to safely return to work, public health officials and political leaders say.

Although capacity has improved in recent weeks, supply shortages remain crippling, and many regions are still restricting tests to people who meet specific criteria. Antibody tests, which reveal whether someone has ever been infected with the coronavirus, are just starting to be rolled out, and most have not been vetted by the Food and Drug Administration.

And as bad as the numbers are for the United States, Sweden has done even less testing per-million. So how could these numbers be accurate?

Okay, given it's doing a poor job of testing, what are Sweden's new case numbers? From Worldometers earlier today: 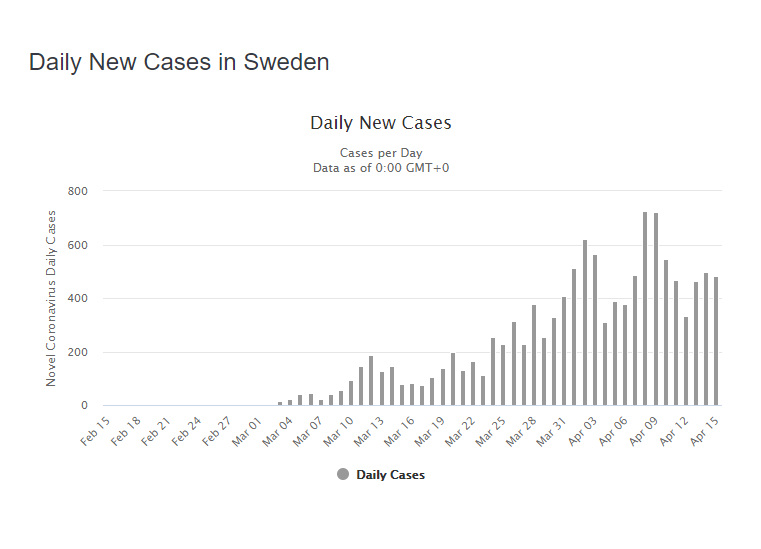 As the chart illustrates, the numbers did drop after approximately six weeks but note that it has spiked for the last three days. (Note a similar pattern in early April.) Is this a statistical anomaly or perhaps, is it too soon to draw conclusions about the path that the virus will take. I think it is too soon but if you’re looking to use Ben-Israel’s conclusion, you probably won’t mention it.

Finally, the question of when we go back to work strikes me as a very important issue for everyone – one in which all sides need to be heard. Hey, Intelligencer editorial writers, instead of using syndicated stand-ins for your beliefs, why don’t you write an editorial and put yourself on the record as supporting a back-to-work order? And then, why don’t you give some space to other points of view?

*In researching the coverage of Israel’s study, I found this subheading on The Times of Israel story on the study:

I’ll bet they do.